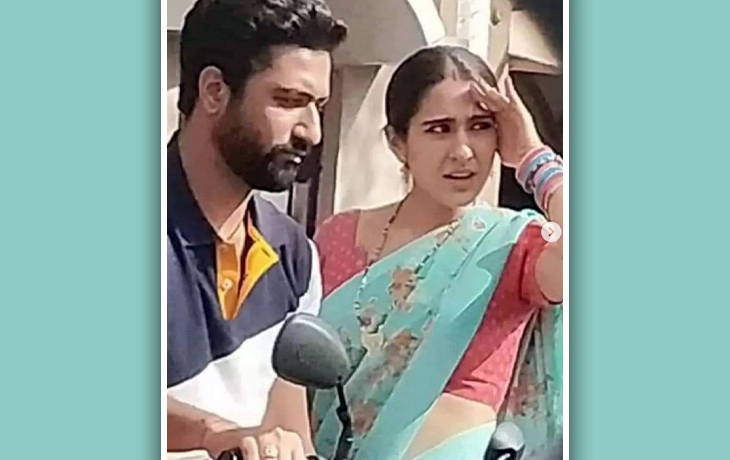 Sara Ali Khan and Vicky Kaushal are among the brilliant actors in the Bollywood industry. Many fans eagerly anticipate their movies due to their excellent acting abilities. Expecting to see them soon on the big screen seems to make fans restless. Pictures of these performers from the sets of the upcoming movie directed by Laxman Utekar have recently leaked on social media.

Actress Sara Ali Khan can be seen wearing a lovely saree in the pictures that have gone viral on social media, and Vicky Kaushal is visibly riding a bike. Sara is also wearing a mangalsutra and bangles, if we look closely. These photos are from their upcoming Laxman Utekar-helmed movie, which still needs a title.

While on Vicky’s work front, he has many movies in his pipeline. He will first appear with Kiara Advani and Bhumi Pednekar in Shashank Khaitan’s comic movie Govinda Naam Mera. He will then appear in Laxman Utekar’s upcoming film, which is still untitled and features Sara Ali Khan.

Later, he will appear in the untitled film by filmmaker Anand Tiwari, which also stars Tripti Dimri, and then in the Vijay Krishna Acharya movie The Great Indian Family, in which he will co-star alongside Manushi Chhillar.

In Meghna Gulzar’s upcoming movie Sam Bahadur, he will also star as the lead.

“Zaalima Song Is About Dealing With Heartbreak”, Says Kanika Mann