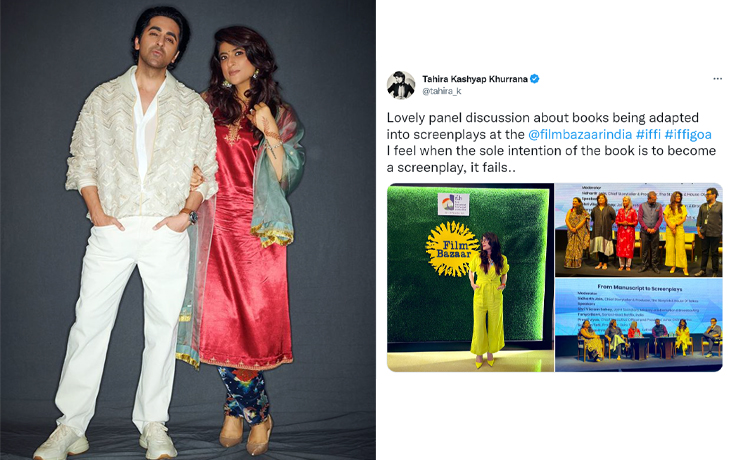 Nobody has a perfect life! Everyone has to overcome obstacles to succeed in life. This fact applies to all lives, including Tahira Kashyap’s. Tahira Kashyap admitted at a discussion during the International Film Festival of India in Goa that she had borrowed money from her husband, actor Ayushmann Khurrana, for her first feature film, Sharmaji Ki Beti.

Tahira Kashyap spoke with the news organization Press Trust of India during IFFI, Goa, and stated, “I’m a compulsive storyteller. It was a part of my growing up process. All that I used to do as a kid was tell stories. I have loved telling stories, be it whatever medium — theatre, radio, podcasts, novels, short films and features. I have always been a storyteller, and I love it.”

But telling stories is a challenging job. The actress highlighted that she had to change jobs many times to pursue her career goal of becoming a storyteller.

“Everyone has their journey. We do four-five things, and then we realize that this is what I want to do. Many people have known what they want to do since they are young. But I was lost for most of my life. I picked various jobs — in the corporate sector, teaching, radio, and events — and after a point, I realized whenever I was involved with a creative job or storytelling, I would get excited about it,” Tahira said to PTI.

Tahira stated, “I borrowed money from my husband to make my first short film, about which I was very conscious. I knew this was what I wanted to be, but I needed a push. I am very grateful for those little openings. But after a point, you are on your own.”

According to PTI, Tahira participated in an “In Conversation” session at the Panaji Film Bazaar during the 53rd International Film Festival of India.

On the work front, Ayushmann will next be seen in the December 2 release of An Action Hero in theatres.