Exclusive Interview: Ravindra Parekh, a Writer, Poet and a Journalist 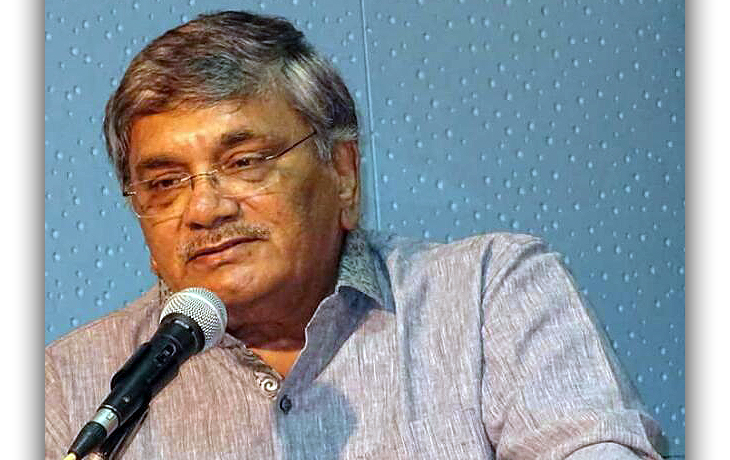 Bio: Ravindra Parekh is a Hindi and Gujarati Writer, Poet and Journalist who published over 50 books on poetry, short stories, novels, plays, humour, translations, adaptations, criticism…etc. He is a movie reviewer too. He was recently awarded Ranjit Patel ANAMI’ award for his latest poetry collection named ‘VASAN.’

1- CAN YOU TELL US A BIT ABOUT YOURSELF?

What should I tell about myself? I got what I wanted, but not when I wanted. Yes, writing and reading have been continuous since childhood. I am Marathi, Southern Soni, and my father was a goldsmith. There was no writer or poet in the 71 generations before me. I am grateful to God for giving me this benefit.
I have written some such stories in Gujarati, which will live on even after I. A Gujarati novel ‘Lathukm’ is written with humour on a woman’s housework. Housewives do housework, but when asked what they do at the time of census or while filling forms for government work, the family members say, ‘does nothing. She cooks food from morning till night, sweeps, washes utensils, washes clothes, sends children to school, nurtures them…etc. Still, it is said that it does not do anything. If all those works, such as cooking and washing clothes… are done outside, then the salary of the man of the house will decrease. The meaningful comedy of this novel can be made into a feature film, or it can be made into a full-length drama, but that will happen.

2- HOW DID YOU PLAN THE STEPS TO GET INTO THE CAREER YOU WANTED? OR HOW DID YOU MAKE A TRANSITION TO A NEW CAREER? TELL US ABOUT YOUR CAREER PATH.

The truth is that there was no thought of making a career. Yes, I wanted to become a teacher after doing arts, but I could not become one. I didn’t want to graduate in science, but my father wanted me to become a doctor, so B.Sc. Took degree. Due to my father’s wish, I was admitted to science, But at that time, I had decided that someday I would bring access to arts immediately after my B.Sc, I got a job as a science teacher in high school, but what I did not want was coming to the fore. I got a job as a cashier at Union Bank, which I didn’t want to do but did for thirty years old. During my career itself, I did M.A. Done with Gujarati-Hindi. B.A. and M.A. I came first class at South Gujarat University and got a gold medal. After this third LL.B. Also earned the degree.
I never wanted to become a journalist, but I did. During my job in the bank, I reviewed films in ‘Gujaratmitra’ and also wrote articles on cinema. After retirement from the bank, the Surat edition of ‘Divya Bhaskar’ started in 2004. After working there for three years, I was called a language advisor and wrote a daily column of stories, articles and satire. Wrote editorials every day for 10 years at the place of sub-editor in Gujarat’s oldest newspaper, ‘Gujaratmitra’ since 2007. There too, articles, humour, stories, columns etc., were written. Now I write weekly columns in ‘Dhabkar’, ‘Sandesh’, and ‘Gujarat to Day’ and also do film reviews in ‘Dhabkar’.
I am avoiding making a career by deciding anything in advance. Whatever came front at the time, he did it with all his heart. They were fond of writing and entered literature with their first story published in 1965. The writing was decided in my mind, and that much happened.

3- SINCE YOU HAVE WRITTEN ABOUT FILM REVIEWS FOR GUJARATI FILMS IN Gujarat Mitra DAILY, WHAT IS THE ONE ASPECT YOU NOTICE THE FIRST?

I did film reviews in Gujarati for Gujarat Mitra, but they were not only about Gujarati films. Because I am Marathi, I also reviewed films like ‘Sairat’. The first Gujarati film was ‘Narsingh Mehta’ in 1932, followed by social films like ‘Mehandi Rang Lagyo’, Rakhana Ramkada’, ‘Akhand Saubhagyavati’, ‘Jigar Ane Ami’ as well as folktales like ‘Jesal Toral’, ‘Raja Bharthari’. Gujarati films also came based on it, but many films were far below the level, so it would be better not to talk about them.
Yet a change has come in Gujarati films over the years. In films like ‘Narmada Taran Wahetan Paani’, ‘Rewa’, ’21Mun Tiffin’, ‘Chello Diwas’, ‘Hellaro’, a lot of attention was given to the theme, script, dialogues, music, and direction. Films like ‘Hellaro’ were also honoured with the National Award and got the highest awards for music, direction…etc. What could be more heartening than the fact that Chello Show, originally by Gujarati director Paan Nalin, has been nominated for an Oscar this year? It is gratifying to know that Gujarati films have reached the international level after coming out of the regional orbit.

4- HOW IS GUJARATI CINEMA DIFFERENT FROM HINDI CINEMA?

Nowadays, Hindi films are going down. Best movies have been made in Hindi, but the way South films have hurt the pride of Hindi films, Hindi films will have to think about themselves again. The audience will be waiting for films like ‘Do Bigha Zameen’, ‘Bandini’, ‘Anand’, ‘Phir Bhi’, ‘Jaagte Raho’, ‘Achanak’, ‘Black’. Such Gujarati films are now being made that can be compared with it. It is a pleasure that Gujarati films have won national awards, and a few Gujarati movies have even reached the Oscars.

5- HOW HAS ENTERTAINMENT JOURNALISM CHANGED OVER THE PAST 5 YEARS?

Entertainment journalism has changed a lot. Reviews of films come in newspapers, on channels, and on social media, but in addition to this, discussions continue about its trailers and teasers. The video is uploaded by interviewing a director, actor, actress, or musician. Interviews are printed in newspapers as if the newspapermen themselves have come to accept the interview, but principally a free translation of another language newspaper or magazine appears. Talking about the audience and readers, they are more interested in pictures than reading them, so more space is filled with pictures, too, in such a way that the body of the actor/actress is highlighted. By the way, these pictures have little to do with art. Most places stop gossiping in videos or on pages. It is not that it is like this everywhere, but cheap talk attracts people more, and because of this, there are fewer talks on serious subjects.

6- IF NOT THIS CAREER, WHAT WOULD YOU HAVE CHOSEN AS AN ALTERNATIVE CAREER?

I had no career prospects. I wanted to be a teacher but could not be. I have been fond of films since the beginning, but films were banned at home. Only on birthdays did my father allow me to watch a religious movie, and I used to watch only other films. My fondness for cinema has taken a toll on my father. Later, he wrote newspaper columns about cinema, but that was not a thought. My literary friend Bhagwati Kumar Sharma asked whether you would write a film column one day. I said ‘yes’. In this way, whatever things came to my mind, I went on doing them. Determined to do the same, I have been able to do very little. So much so that whatever he did, he did it with great enthusiasm and total involvement. I also wrote a documentary on Surat with renowned film director Ketan Mehta. Gujarati and Hindi Tv Serials have also been written. I also desire to write a film, but it will be a little more than my wish.

7- ACCORDING TO YOU, WHICH IS THE FILM THAT TICKS ALL THE BOXES FOR THE PERFECT MOVIE AND WHY?

I have seen so many good movies that pointing fingers at anyone would not be fair to the rest of the movies. But in the few months I have seen films, South’s film ‘Sitaramam’ impressed me a lot. After this, I saw the ‘Chello Show’ and ‘Uthikta’. Write reviews of these too, but I could not review ‘Sitaramam’ even if I wanted to. This film is so powerful that I find me unable to check it. I have never seen such a beautiful love story before. There may be better movies than this, but I haven’t seen them. Unfortunately, the film did not do well, but I cannot forget it. Anyone in the mood to watch a healthy and artistic cinema, please don’t miss this one.

8- CAN YOU TELL US ABOUT THE CHALLENGES YOU FACED IN YOUR CAREER? AND HOW DID YOU OVERCOME THEM?

I said I was unaware of any possibility of making a career. I wanted to become a teacher, but I could not become one, which meant I did not have the strength to face the challenges. I still haven’t encountered it. It’s not like that either. I didn’t want to go to science, went. And achieved a degree in first class. My father didn’t let me go to Arts, but I decided to do a B.A. in Gujarati then. I will do it, and with a bank job, M.A. Did it and passed out of the entire university twice as a first-class first. I didn’t have to do a bank job, 30 years old and Asi. Took voluntary retirement from the post of manager. I may not be successful, but I don’t feel like a failure either.

9- WHAT SKILLS ARE NEEDED FOR THE JOB? HOW DID YOU ACQUIRE THE SKILLS?

There is no skill development without desire, and there should be a desire to develop the skill. I believe that what has to be done should be known. If there is interest in any art, it should be understood and learned with its full potential. If you don’t have a good and have to do something, that is a different thing, but if you are interested in any art or business, then doing it with less ability is cheating. whoever is interested, So doing it with less power is cheating. Whatever you are interested in, you should try to get it with all your heart. He who does not do this betrays himself. I wanted to become a poet, writer, and journalist, so what can be done by doing this? I did it with all my heart by staying within my limits. I believe that if there is a will, there is a way.

10- WHAT IS YOUR ADVICE TO STUDENTS/NEWCOMERS BASED ON YOUR EXPERIENCE?

What advice can I give to a newcomer where I am learning myself? All I can say is that no one gets a ready-made life. I never wanted such a life without struggle. It is so much that you will get a little less, but whatever you want to do, do not leave it in the middle. Don’t give up, and don’t get tired, either. It is impossible to walk without lifting your feet. Take at least one step. The way will be in front of you. Thank you.

Dhanush And Sekhar Kammula Collaborating For A Trilingual Movie