Big Boss 16: Daljiet Kaur criticizes her ex-husband Shalin Bhanot for referring to them as “best friends.” 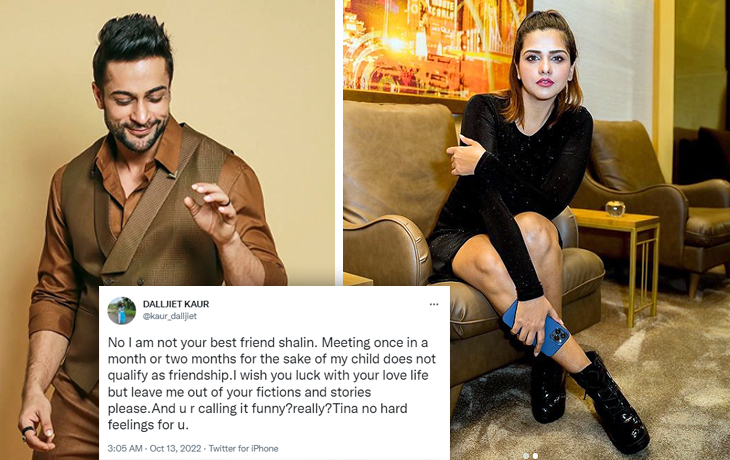 Bigg Boss 16 premiered on October 1st, and since then, contestants have been placing their best foot forward to capture viewers’ attention. The Salman Khan-hosted show’s current season boasts many new themes and segments that have elevated it to the top of everyone’s wishlist. Shalin Bhanot revealed his feelings for Tina Datta in a recent show episode and talked openly about his past marriage to Daljit Kaur.

Shaleen Bhanot revealed his affection for Tina Datta in the previous episode. The actor briefly discussed his personal life with Tina Datta while expressing his love for her. He told Tina that he and his ex-wife, Daljiet, are like best friends.

Now Daljiet Kaur has published a social media post criticizing Shalin Bhanot’s claims regarding their marriage. On Twitter, she wrote, “No, I am not your best friend, Shalin. Meeting once a month or two months for the sake of my child does not qualify as friendship. I wish you luck with your love life but leave me out of your fiction and stories, please. And you are calling it funny? Really?Tina, no hard feelings for you.”

Shalin approached Tina and stated, “Thank you for making my bed. I just wanted to tell you that I noticed and am genuinely telling you.” Tina displayed some concerns says that she was unable to trust him. Shalin said, “That will happen outside the Bigg Boss house. I am just telling you, though, that this is not where you can give your 100%. I promise you one thing, and I will not hurt you.”

Tina responded, “This is what I am scared of.” Being a boy, according to Shalin, is an issue since it’s always the boy’s fault when everything goes wrong. Tina stated, “I Know what you mean; the problem is that I know her ( Daljeet Kaur, Shalin’s ex-wife). We are not friends, but yes, we know each other.”

Shalin responded after hearing this, “that doesn’t bother me. You don’t know the equation, and it’s like best friends.” Shalin was then directly asked by Tina, “was it an abusive relationship?” Tina claimed that she had heard that, but Shalin vehemently denied it.

Shalin and Daljeet decided to part ways in 2015 for the unversed. The Bigg Boss 16 participant was abusive toward the actress, according to the actress. Daljeet stated the following to The Times of India, “He pushed me in my father’s presence, and my thigh was bruised for almost a month. But I forgave him, thinking it takes time for a marriage to work. On another occasion, he twisted my arm in front of his parents. But I finally decided enough was enough when he came charging towards me while I had Shaarav in my arms. It could have turned fatal for my 40-day-old premature child. That day, I left for my parent’s home in Bangalore.”