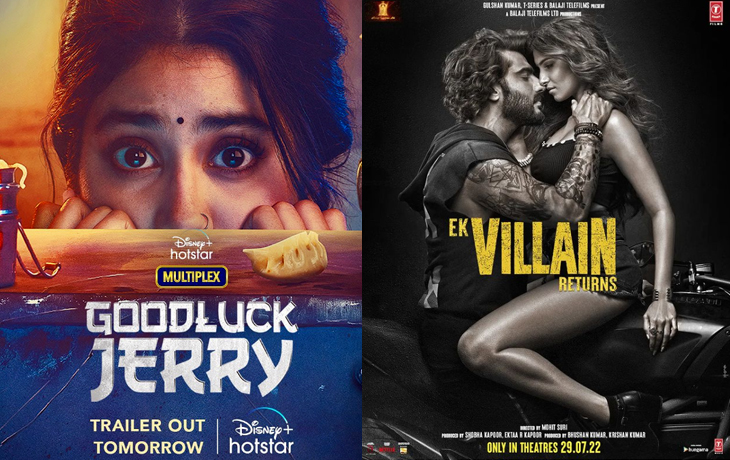 One of the most eagerly anticipated films of the year is Good Luck Jerry, starring Janhvi Kapoor, and Ek Villain Returns, starring Arjun Kapoor. The action-thriller starring the stars of 2 States is set for release on July 29, 2022, the same day the Dhadak actress’ movie is set to launch on Disney+Hotstar. For the first time, Janhvi and Arjun’s movies are released on the same day. The movie GoodLuck Jerry is a remake of the 2018 Tamil film Kolamaavu Kokila, which starred Nayanthara and Yogi Babu in the lead roles. The movie Ek Villain Returns is the spiritual sequel to the Sidharth Malhotra and Shraddha Kapoor-starring 2014 film Ek Villain.

In the movie Good Luck Jerry, Janhvi plays Jaya “Jerry” Kumari, a Biharian immigrant who turns to drug dealing in Punjab to pay for her mother’s treatment, who has been given a stage 2 cancer diagnosis. Deepak Dobriyal, Sushant Singh, Mita Vashisht, Neeraj Sood and Mita Vashisht play significant roles in the movie. Sidharth Sengupta is the director, and Subaskaran Allirajah, Aanand L. Rai, and Mahaveer Jain are the producers.

Arjun and Janhvi are working on exciting projects, including The Lady Killer, which will include Bhumi Pednekar for the first time. Additionally, he will collaborate on Aasmaan Bhardwaj’s Kuttey with Tabu, Konkona Sen Sharma, Radhika Madan, Naseeruddin Shah, and Kumud Mishra. Contrarily, Janhvi will next be seen with Varun Dhawan in Bawaal. She’ll then feature in Mr and Mrs Mahi and Mili.

Manushi Chhillar Kick-Starts The Shoot Of Tehran With John Abraham