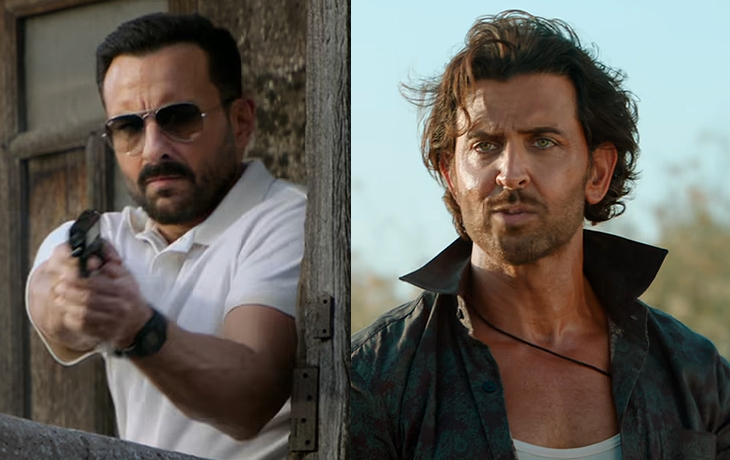 The next Hindi film Vikram Vedha, starring Hrithik Roshan and Saif Ali Khan, is getting ready to hit theatres. In the movie, Hrithik plays a notorious criminal, and Saif plays a tough cop. Radhika Apte, Rohit Saraf, Yogita Bihani, and Sharib Hashmi are also featured in the movie. Vikram Vedha, which Pushkar-Gayatri directs, is the Hindi version of their 2017 Tamil film. R Madhavan and Vijay Sethupathi played the critical actors in the original. On September 30, Vikram Vedha will be seen in theatres worldwide.

Today, the eagerly anticipated Vikram Vedha trailer was released. Action scenes abound, as do some tense confrontations between Saif as Vikram and Hrithik as Vedha. Additionally, it includes excellent visuals and speech. While the teaser does not give away much about the plot, it does keep the identity of the two protagonists, played by Hrithik and Saif, a secret. It is produced by Friday Filmworks, T-Series Films, Reliance Entertainment, YNOT Studios, and Friday Filmworks.

Although Hrithik could not attend the special trailer preview for Vikram Vedha on Wednesday, Saif and Hrithik received loud applause from the audience. The movie, inspired by the Indian folktale Vikram and Betaal, tells the tale of a fierce cop who decides to find and murder a similarly brutal thug.

The teaser for Pushkar-film Gayatri’s Vikram Vedha was released a few days ago, and the crowd responded favourably to it.

The second on-screen partnership between Hrithik Roshan and Saif Ali Khan is back with Vikram Vedha. The couple was spotted together in the 2002 movie Na Tum Jaano Na Hum, which also starred Esha Deol as the main character. Three years after his box office hit War, Roshan is back on the big screen with this film. Saif, on the other hand, makes a cinematic comeback following the release of Jawaani Jaaneman in 2020.

“No Khan’s, Just One Bachchan, I’d Wanted To Work,” With Says Ekta Kapoor