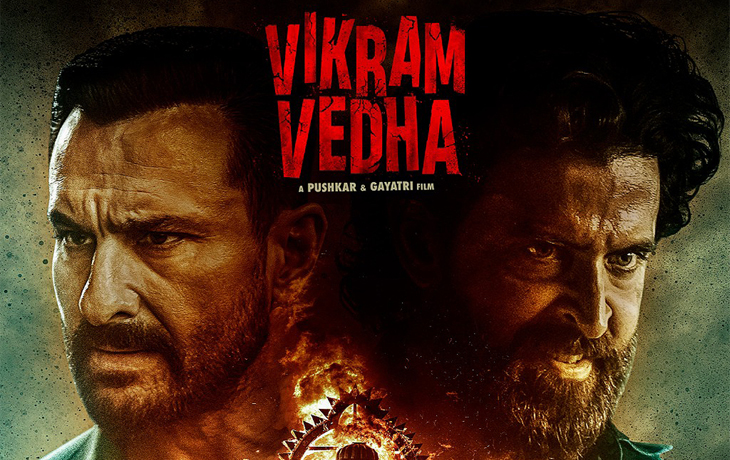 Vikram Vedha is an action-thriller written & directed by Pushkar-Gayatri. The story of Vikram Vedha is full of twists and turns as a tough cop Vikram (Saif Ali Khan) sets out to track and chase a dreaded gangster Vedha (Hrithik Roshan). A cat-and-mouse chase unfolds, where Vedha – a master storyteller, helps Vikram peel back layers through a series of stories leading to thought-provoking moral ambiguities.

Right from the beginning, this film manages to create an appeal, the kind that only mass entertainers are capable of. Be it the basic conversations amongst police officers or Vedha’s aura and showcasing how they are two different but the same. The fact that there’s no right and wrong, which is the kind of fact that the makers wish to establish, makes an interesting movie to watch.

Along with that, there’s also the entire set-up of Lucknow that sits well with the kind of narration that follows, and all the references that we have to Hindu epics, our folklore of Vikram and Betaal, eventually make sense. The direction is top-notch, the writing is well suited for the Hindi-speaking audience, and the production and screenplay are all solid. The movie’s dialogues also go well with us in most instances, with some entertaining one-liners that come out of nowhere but eventually make a mark.

The only fault this film might have is that it is a remake with just a new setting and that there’s not much done to change what we see. But well, that’s what a remake is to be, only a different set-up but to target a wider audience, and that is a job done well here. The climax is a winner for us because all those stories, the references, and the entire being of this film make sense. It is eventually justified as to why whatever is happening is happening and why things end the way they end (or do they end?)

I’d love to see a follow-up on this film and how it all goes down!

Finally, coming to the performances, this movie is a Hrithik Roshan film in that sense because he owns every scene, every dialogue, and everything he does, in a way that no one else can. There were so many doubts about how he’d take up this role, but he is, in fact, the most promising thing about this film. Saif Ali Khan as Vikram, the righteous cop, is also a job well done, as he knows how to balance and keep up with the story. Sharib Hashmi is another actor who stands out and successfully makes a mark in a way that not everyone can suffice in this role. Rohit Saraf, Satyadeep Mishra, and Yogita Bihani do their parts well. Radhika Apte as Vikram’s wife is a role that should’ve been explored more, but since the film is not about her, she is just doing what the script needs her to.

“Grateful For The Blessings,” Says Richa Chadha And Ali Fazal

Adipurush First Look: Prabhas surreal appearance with a bow and arrow; teaser to be released on October 2