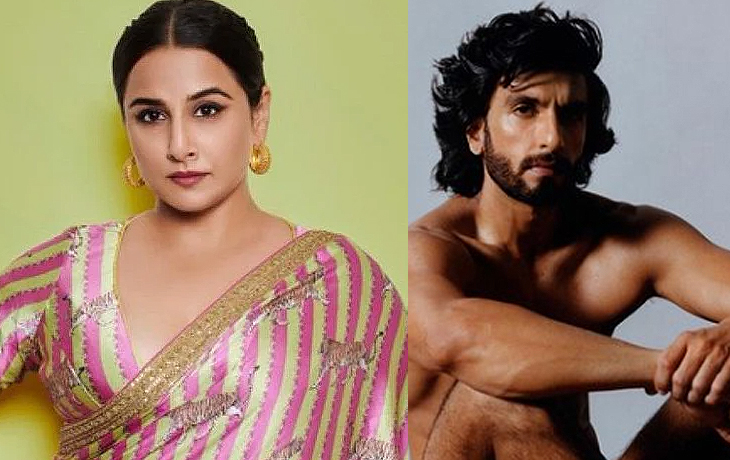 The most recent naked picture shoot of Ranveer Singh has sparked a nationwide discussion. While some people love the actor and his images, others are upset by them. A request to file a First Information Report (FIR) against Ranveer for allegedly “hurting sentiments of women” with his nude photos was made to the Mumbai Police earlier this week. Many of his professional peers have spoken out in his defence throughout this time, and the most recent actor to do so is Vidya Balan.

While conversing with India Today, the actress said, “It is pointless, blasphemous to try to curb someone’s freedom of expression. We are all individuals and if you don’t like what the other person is doing, close your eyes. If it is a newspaper or a magazine that you are not liking, shut it. You want to tear it apart, tear it, burn it, do whatever in the confines of your own home or your own space because you cannot dictate what the other individual should do because then I will have a problem with what you have done and then this is an endless loop.”

Before this, Ranveer’s close pals, Alia Bhatt and Arjun Kapoor, had also expressed their support for him.

The Maharashtra State Commission for Women has received a complaint against Ranveer Singh for his nude photo shoot following filing an FIR at the Chembur Police Station. In the complaint, attorney Ashish Rai claimed that actor Ranveer Singh was responsible for the naked photoshoot, which was shared on social media. Following that, an FIR was filed under the IPC, and IT Act against the actor at the Chembur Police Station.

Never Have I Ever season 3 trailer has left everyone with questions about Devi, Paxton, Ben and mysterious guy

The music video for BLACKPINK’s latest track Ready For Love, is here; Here’s a sneak peak