Popular
Upasana Konidela, the wife of Ram Charan, apologizes...
Shaakuntalam featuring Samantha Ruth Prabhu is postponed again;...
Trailer for Hansika’s Love Shaadi Drama Out: The...
Anupam Kher Responds to Shah Rukh Khan’s Pathaan’s...
The Sridevi-starring film English-Vinglish will premiere in China on...
Vikram Bhatt Shares A Sneak-Peek Into 1920 –...
Kangana Ranaut Warns Her Stalker
Neil Bhoopalam As Jeet And Tushar Pandey As...
Akshay Kumar Looks Super Cool In Kudiyee Ni...
Vijay Deverakonda And Parasuram Petla Collaborating For A...
Home Bollywood news Varun Dhawan’s “Bhediya” beard is one that Kriti Sanon likes, and she confirms that the teaser will be out shortly
Bollywood newsNews

Varun Dhawan’s “Bhediya” beard is one that Kriti Sanon likes, and she confirms that the teaser will be out shortly 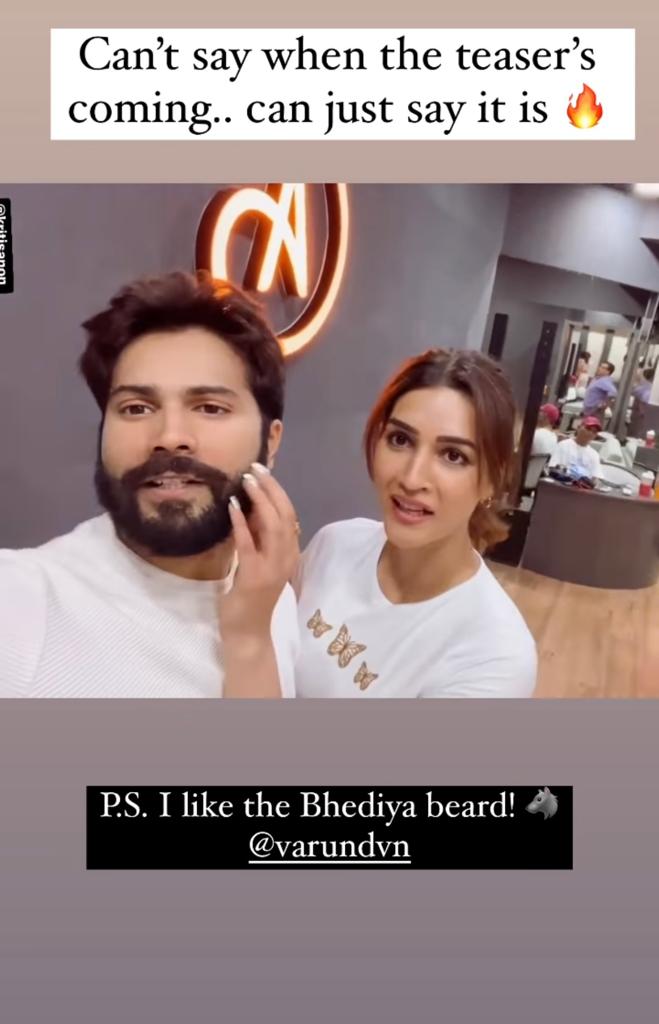 In the upcoming horror comedy Bhediya, Kriti Sanon and Varun Dhawan will reunite once again on screen. The well-known actors are pretty busy with rehearsals for an astonishing song number that will soon start filming. Varun Dhawan and Kriti Sanon are both delighting their fans and followers with amusing videos from their rehearsing sessions in the meantime. With their incredible chemistry in the Instagram videos that are currently taking the internet by storm, the Bhediya couple is undoubtedly winning hearts.

Kriti Sanon posted a unique video she made with Varun Dhawan to her official Instagram account. Varun can be seen teasing Kriti in the video, claiming that this is her second day at the rehearsals since arriving from Europe. The actress teased her co-star with his ‘Bhediya’ beard, now fully grown back. When will the teaser show up? Varun is seen asking. Although Kriti didn’t answer his question on the video, she posted it on her Instagram post and stated, “Can’t say when the teaser’s coming.. Can just say it is (fire emoji) P.S I like the Bhediya beard! @varundvn”.

For those unaware, Bhediya is Varun Dhawan and Kriti Sanon’s second on-screen collaboration. The well-known actors appeared together on film in Rohit Shetty’s Dilwale alongside Bollywood’s most adored on-screen couple, Shah Rukh Khan and Kajol.

Amar Kaushik is the director of Bhediya, which is said to be inspired by the concept of werewolves. The third film in producer Dinesh Vijan’s horror-comedy series following Stree and Roohi is scheduled to open on November 25 this year. Important news regarding the Bhediya teaser release date is anticipated very soon.