Popular
“Aditya Dhar, You’re The Biggest Blessing In Life,”...
Ajay Devgn And Varun Dhawan Praise Each Other...
Dhanush And Sekhar Kammula Collaborating For A Trilingual...
Exclusive Interview: Ravindra Parekh, a Writer, Poet and...
Tiger 3: Salmaan Khan to reunite with actress...
Tahira Kashyap States that she borrowed money from...
Kartik Aaryan Is Spooky In Freddy’s New Teaser
Mahesh Babu Pens A Heartfelt Note For His...
Ranbir and Alia disclose the name of their...
Anand L Rai on Akshay Kumar’s Raksha Bandhan’s...
Home TV Vaishali Takkar’s suicide note references to stress and harassment from an ex-boyfriend
TV 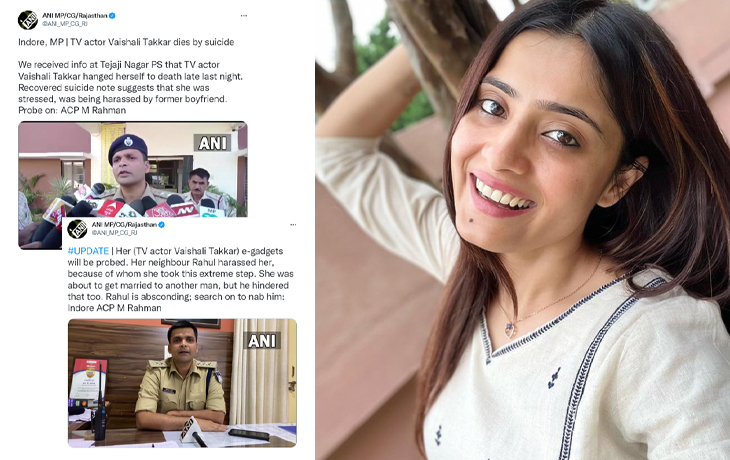 On Sunday, October 16, actress Vaishali Takkar of Sasural Simar Ka committed suicide. The 26-year-old’s body was discovered in her house in Indore. According to the ANI news agency, Vaishali left behind a suicide note that appears to be a reference to the stress and harassment she was experiencing from her ex-boyfriend. Vaishali, a character in the television program Yeh Rishta Kya Kehlata Hai, resided in Indore with her father and brother. Her family is shocked by this decision.

With Yeh Rishta Kya Kehlata Hai (2015), Vaishali Takkar made her television debut. She was cast in Rakshabandhan, another daily soap, alongside Nishant Malkhani. The actress came to Mumbai to pursue a career in the entertainment industry after being born and raised in Mahidpur, Ujjain.

RD Kanwa, the head of the Tejaji Nagar police station, stated on Sunday night, “From her room, we have retrieved a five-page message that was kept in a small diary. We’re checking the content of it. She mentioned a former partner and claimed he was bothering her. She claimed he would neither marry nor permit her to wed anybody else. The ex-boyfriend is married and has two children.”

RD Kanwa said, “An iPhone, iPad, and other items have been seized from her house, and we have summoned him (her ex-boyfriend) for questioning.”

Vaishali Takkar’s father allegedly entered the room after she had been in there for an extended time without leaving and discovered her dead, according to the police. When the cops arrived later, the body was found and took it to the Maharaja Yeshwantrao Hospital for an autopsy. The police have started looking into this case due to the suicide note. The police have taken Vaishali Takkar’s phone as part of their investigation and are also taking notes on the family members’ statements.

According to the ANI report, Vaishali initially relocated to Mumbai, Jaipur, and finally to the Sai Bagh Colony neighbourhood in the Tejaji Nagar police station region of Indore. She spent the previous year residing there with her father and brother.

Bigg Boss Gets Flak From Jai Mehta For...

Salman Khan warns about the surprises in the...

Comedian Raju Srivastava passes at the age of...