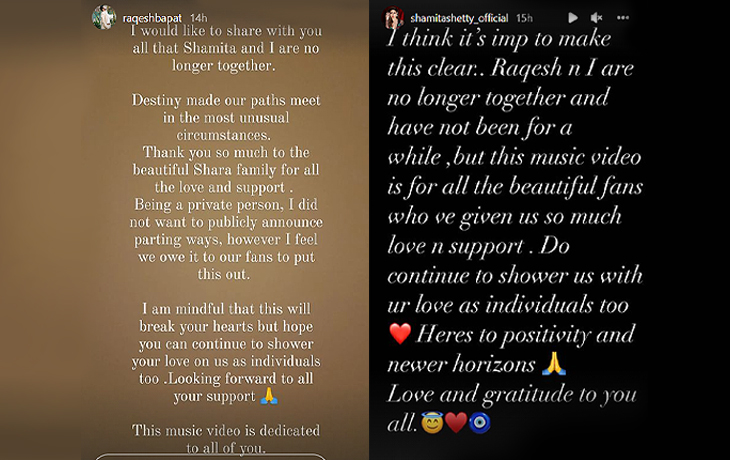 Raqesh Bapat and Shamita Shetty are one of the cutest couples on television. The two connected on Karan Johar’s reality series Bigg Boss OTT, where they first met. In the home, they clicked right away and eventually developed a romantic relationship. In the actual performance, the couple discussed their feelings for one another. They were affectionately known as “ShaRa” by their admirers, who also admired their chemistry. There have recently been several rumours that the two have split up because of conflict. Unfortunately, the actors have made their breakup public, leaving their Shara family inconsolable.

Raqesh took his Instagram, posted a story, and wrote, “I would like to share with you all that Shamita and I are no longer together. Destiny made our paths meet in the most unusual circumstances. Thank you so much to the beautiful Shara family for all the love and support. Being a private person, I did not want to announce parting ways publicly. However, I feel we owe our fans to put this out. I am mindful that this will break your hearts, but I hope you can continue to shower your love on us as individuals too. Looking forward to all your support A This music video is dedicated to all of you”.

“I can be naked in front of a thousand people… It’s just that they get uncomfortable,” says Ranveer Singh

“Why does having a family or child change my professional life?” Says Alia Bhatt