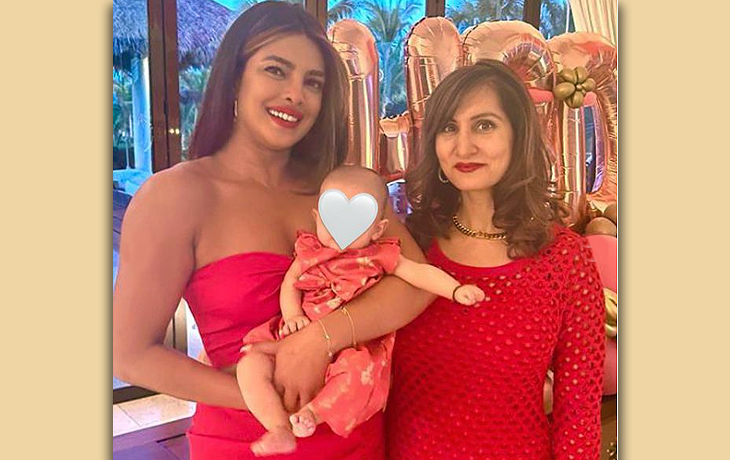 On July 18, Priyanka Chopra just celebrated her birthday. Her husband, Nick Jonas, posted several pictures on his social media accounts on a crucial day to give followers a peek at their private celebrations. A day later, PeeCee’s friend Tamanna Dutt posted a few more pictures of the actress on Instagram while wishing her a very happy birthday. In one of the three images, Priyanka could be seen smiling for the camera while holding her baby girl Malti Marie in her arms.

A few hours ago, Tamanna posted multiple images of herself and Priyanka on the photo- and video-sharing website. While they were posing for a selfie in the first image, Priyanka and she were seen with her daughter Malti in the next one. Priyanka is spotted in the picture looking extremely lovely in a red off-shoulder outfit. She was seen holding her daughter, wearing similar-coloured clothing, in her arms. Tamanna is spotted standing close by. A white heart emoji covered Malti’s face because Nick and Priyanka hadn’t yet made her identity known on social media. The third and last photo showed Priyanka and Tamanna again, posing on a bridge outside.

Tamanna shared the pictures with a touching note, “Happy birthday to our golden girl with a heart of gold. Celebrating your birthday as single girls earlier and celebrating your day with your beautiful family is so amazing (red heart emoji) (evil eye emoji). Love you lots. 22 years and counting #best friends# sisters# god daughterMM #friends like family Thanks for spoiling us as always @nickjonas.”  Priyanka responded in the comments, “(heart eye emoji) So glad you came, babe.” Priyanka and Nick Jonas adopted Malti through surrogacy earlier this year, for those unaware

Two murder suspects were killed in an encounter in Punjab in the Sidhu Moose Wala Case.

Marathi Film De Dhakka 2 Music and Trailer Is Out