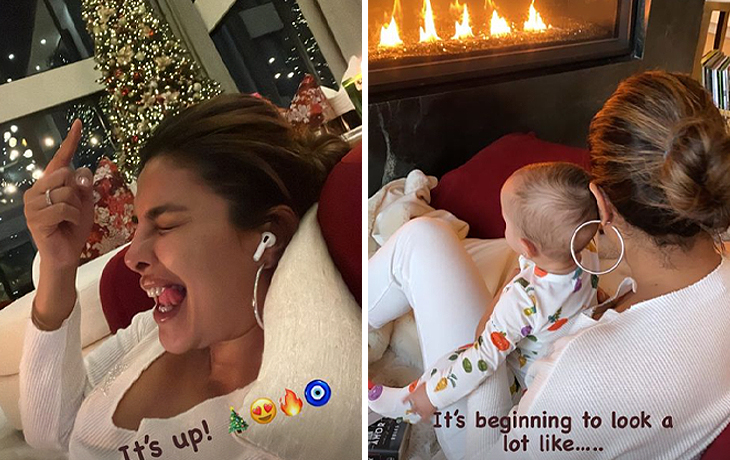 Priyanka Chopra has returned to Los Angeles and is thrilled to spend time with her daughter Malti Marie Chopra Jonas and her husband, singer Nick Jonas. After three long years, Priyanka returned to India, where she was occupied with her work commitments. PeeCee recently posted on her social media accounts about her delight as she started Christmas preparations at her Los Angeles home.

Priyanka uploaded a photo of her Christmas tree on Instagram Stories along with the caption, “It’s up!” She also included emojis for a Christmas tree, heart-eyed, fire, and evil eyes. She and Maltie Marie can be seen twinning in another photo, sitting in front of their fireplace. Malti’s face wasn’t revealed by Priyanka, though. In the meantime, this Christmas will be Malti’s first after her birth. For the unversed, Malti’s name was taken from the middle names of Priyanka’s mother, Madhu Malti Chopra, and Nick’s mother, Denise Marie Jonas.

In January this year, Priyanka and Nick announced that they had become parents through surrogacy. They said in a joint statement, “We are overjoyed to confirm that we have welcomed a baby via surrogate. We respectfully ask for privacy during this special time as we focus on our family. Thank you so much.” On Mother’s Day, Malti was released from the NICU after more than 100 days there.

While on the Workfront, Priyanka will next be seen in Love Again, a musical in which she co-stars with Sam Heughan and Celine Dion. She also features in the Russo Brothers’ series Citadel, and the following science fiction program will debut on Prime Video’s OTT platform. The diva will also feature in Jee Le Zaraa, a movie directed by Farhan Akhtar and starring Alia Bhatt and Katrina Kaif.