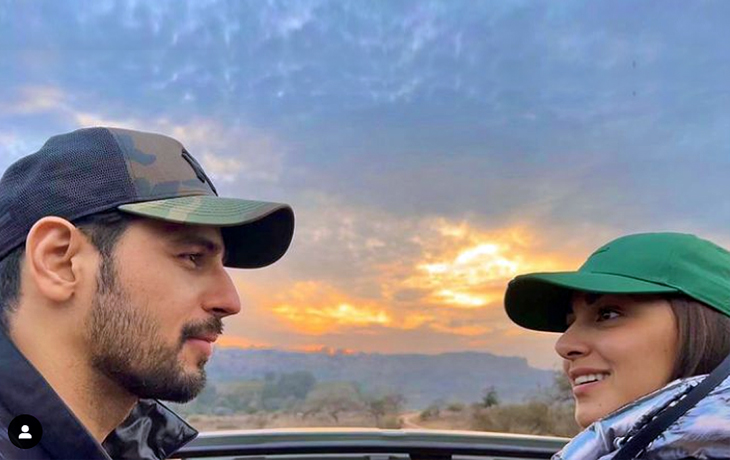 Actors Sidharth Malhotra and Kiara Advani from Shershaah have recently been making the news. There has been a lot of excitement on social media due to rumours about their upcoming wedding in February. Wishes have flooded in for actor Sidharth Malhotra on social media since his 38th birthday was celebrated yesterday. The birthday boy received love from his family, friends, admirers, and colleagues on social media. Kiara Advani, who is rumoured to be his girlfriend, also posted a sweet birthday Instagram post!

On her Instagram page, Kiara Advani posted a picture of herself and Sidharth. The photo was taken a year ago during their New Year’s trip to Ranthambore. In the picture, Sidharth and Kiara can be spotted looking at one another while on a jungle trip in Ranthambore. Sidharth is wearing a black coat and a cap with a camouflage pattern, and Kiara can be seen beaming as she glances at him. Kiara can be seen wearing a green hat. The lovely landscape and the jungle are seen in the background. Kiara wished Sidharth and stated on the image, “Whatcha lookin at birthday boy.”

Ananya Panday and Ishaan Khatter, reportedly dating at the time, were said to have joined Sidharth Malhotra and Kiara Advani as they rang in 2022. Some of the reports were true, after all. Ananya Panday responded to Kiara Advani’s post by saying she clicked this cute photo. “I think I took this picture, cuties!!!!” Stated Ananya Panday.

Fans obviously couldn’t stop praising Sidharth and Kiara! Whereas a user of Instagram commented, “Cutesttttt,” one more fan wrote, “Worthy Waiting Kinda Post.” Many people were interested in knowing further regarding their rumoured wedding, as one of the comments stated, “R u guys getting married finally?”

Sidharth Malhotra and Kiara Advani would wed in the first week of February, according to an ETimes article. The major wedding ceremony will occur at the Jaisalmer Palace Hotel on February 6 after the pre-functions, which include haldi, mehendi, and sangeet, which happen on February 4 and 5.