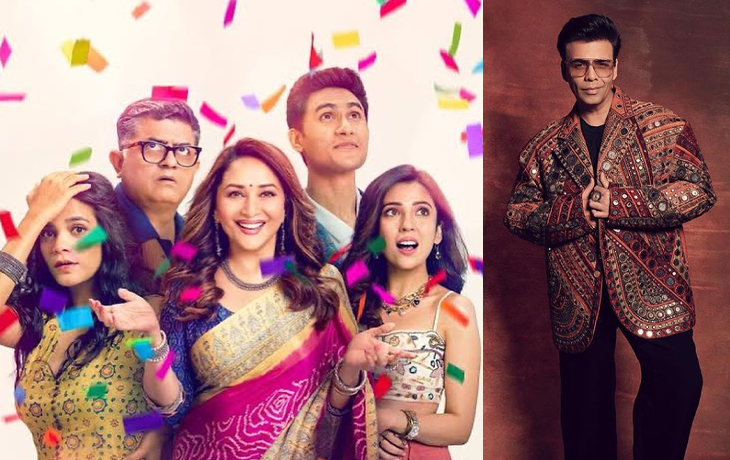 Karan Johar expressed his delight at seeing Madhuri Dixit in the movie while posting a picture of Maja Ma. “A brave, poignant and to add an audience pleaser… this dramedy hits the spot with its relentless storytelling… oscillating between emotion and humour … you walk out with a feeling of sunshine …. Mainly because of the luminous and stunning @madhuridixitnene who plays Pallavi with so much integrity and poise.. she is just a pleasure to watch in every frame….”

Karan also praised the whole cast and asked people to watch the movie when it comes out. “Kudos to the entire cast … Gajraj, Ritwick, Barkha, Shrishti, Simone..all performances are on point and top-notch! I am obsessed with @sheeba.chadha and Rajit Kapur, who play BOB and PAM with sheer genius! They are hilarious !! I want a spin-off, please !!! Congratulations to @anandntiwari for directing a challenging narrative with such ease and craft…. To @bindraamritpal for always raising the bar of content and to team @primevideoin for their first smashing original! Watch this gem, and you will have a #Majama time!!! Releases on October 6!” captioned Karan.

Maja Ma, directed by Anand Tiwari, is a family entertainer set against the celebratory backdrop of a traditional festival and a conventional colourful Indian wedding.