Popular
“Aditya Dhar, You’re The Biggest Blessing In Life,”...
Ajay Devgn And Varun Dhawan Praise Each Other...
Dhanush And Sekhar Kammula Collaborating For A Trilingual...
Exclusive Interview: Ravindra Parekh, a Writer, Poet and...
Tiger 3: Salmaan Khan to reunite with actress...
Tahira Kashyap States that she borrowed money from...
Kartik Aaryan Is Spooky In Freddy’s New Teaser
Mahesh Babu Pens A Heartfelt Note For His...
Ranbir and Alia disclose the name of their...
Anand L Rai on Akshay Kumar’s Raksha Bandhan’s...
Home Korean Entertainment Gong Hyo Jin posts a cute photo ahead of her wedding to Kevin Oh
Korean Entertainment 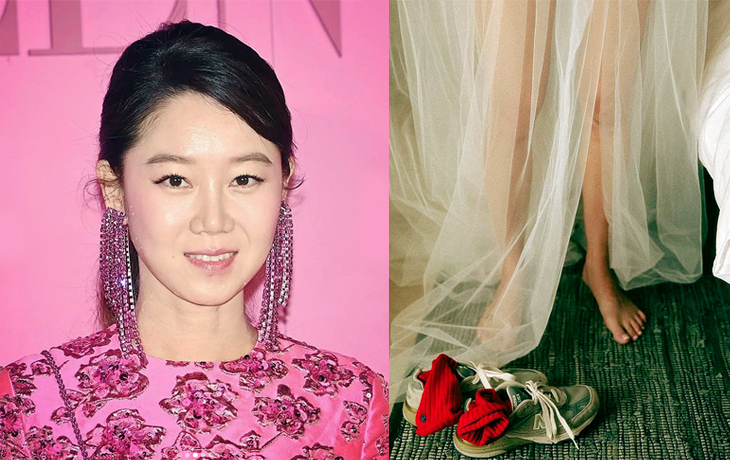 Gong Hyo Jin got married! As the stunning Korean actress embarks on a new chapter in her life, fans can rejoice alongside the star herself. The famous “It’s Okay, That’s Love” actor and prominent singer Kevin Oh tied the knot in a secret ceremony held in New York, USA, in August.

According to local time, the actress will hold her wedding ceremony in New York, according to a confirmation from her management SOOP agency on October 11. It was discovered that only her closest friends and family had received invitations to the exclusive event in the singer’s hometown. According to reports, the celebration was attended by Gong Hyo Jin’s closest friends, Jung Ryeo Won and Uhm Ji Won.

Gong Hyo Jin posted a romantic message on Instagram for her soon-to-be husband even though she kept most of the event’s specifics a secret. The actress is visible barefoot and wearing what appears to be a white bridal gown for her wedding. A net dress is flowing about her, and a worn-out pair of sneakers with red socks is at her feet. Gong Hyo Jin’s caption for the image reads, “my one and only.. I’m ready!” aimed towards Kevin Oh.

Her management company verified Gong Hyo Jin’s marriage via media sources, adding her to the list of well-known Korean celebrities who have tied the knot this year. Including Son Ye Jin and Hyun Bin, in addition to Park Shin Hye with Choi Tae Joon. As fans wondered about Gong Hyo Jin’s then-unannounced marriage due to her catching the wedding bouquet, the latter’s wedding ceremony served as a hint for them to discover the couple’s relationship.

Big Boss 16: Daljiet Kaur criticizes her ex-husband Shalin Bhanot for referring to them as “best friends.”