Popular
“Aditya Dhar, You’re The Biggest Blessing In Life,”...
Ajay Devgn And Varun Dhawan Praise Each Other...
Dhanush And Sekhar Kammula Collaborating For A Trilingual...
Exclusive Interview: Ravindra Parekh, a Writer, Poet and...
Tiger 3: Salmaan Khan to reunite with actress...
Tahira Kashyap States that she borrowed money from...
Kartik Aaryan Is Spooky In Freddy’s New Teaser
Mahesh Babu Pens A Heartfelt Note For His...
Ranbir and Alia disclose the name of their...
Anand L Rai on Akshay Kumar’s Raksha Bandhan’s...
Home New Release Freddy’s teaser is out! Kartik Aaryan appears as a spooky dentist in a new thriller
New Release

Freddy’s teaser is out! Kartik Aaryan appears as a spooky dentist in a new thriller 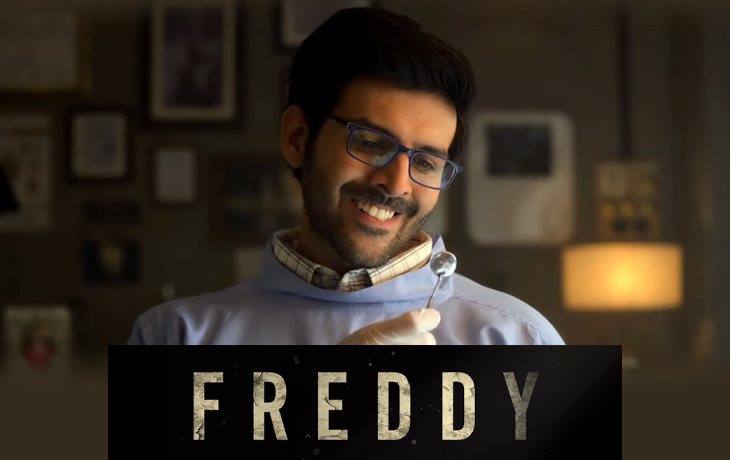 Kartik Aaryan is one of the best actors working today in the industry. The actor professionally has had a fantastic year and is now among Bollywood’s most bankable celebs. Bhul Bhulaiyaa 2, Kartik’s most recent film, broke many box office records and was among the few Bollywood movies to gross over $100 cr. All eyes have been on Kartik since the first picture from his next film Freddy was revealed. Today the teaser for this movie has been unveiled. You will see the actor playing a role he has never before played, and he certainly looks intense.

Kartik Aaryan has previously portrayed variant characters, but this is the first time we see him performing a psychotic personality. It has never been easy for an actor to take on a part that would give us chills and have the audience on the edge of their seats. However, after watching Freddy’s teaser, we must acknowledge that Kartik has shown his versatility, and from what we can tell from the teaser, it is obvious he is here to stay! Kartik will appear in several shades in the teaser, all entirely distinct from one another.