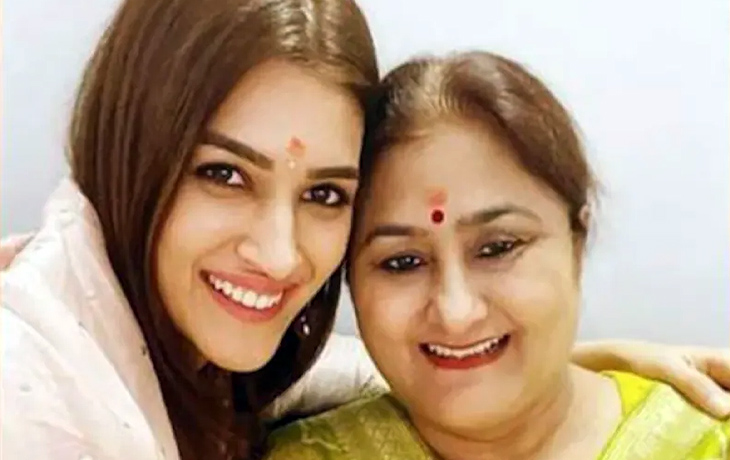 Unquestionably, Kriti Sanon is one of the most sought-after actors in the modern Hindi film industry. The actress, who comes from a Punjabi family in Delhi, succeeded in Bollywood through sheer dedication and work. But because of her close-knit family, Kriti Sanon has always maintained her groundedness despite being a prominent Bollywood actress. In the recent Koffee With Karan 7 episode, Kriti said that she talks story ideas over with her family before signing the projects. Additionally, the actress admitted that she declined to participate in Karan Johar’s segment of Netflix’s Lust Stories because her mother urged her not to do it.

Geeta Sanon, the mother of actress Kriti Sanon, has recently been trolled on social media for admiring the song “Thumkeshwari” from the upcoming movie Bhediya. Alongside Varun Dhawan and Shraddha Kapoor, Kriti is a part of the recent chart-topper. The trolls noted the contrast between Geeta’s approval of her daughter’s performance of such sensual songs and her displeasure with Kriti’s participation in Lust Stories due to its explicit scenes. For those who don’t know, Kriti Sanon stated in the Koffee With Karan 7 show that her mother was uncomfortable with the movie’s concept because of their middle-class upbringing.

Geeta Sanon explained in a recent interview with India Today why she asked Kriti to decline doing Lust Stories. “I thought we would not be comfortable seeing her doing such a scene at the beginning of her career, and it’s about orgasm only,” answered the actress’s mother.

“I think her problem was more that it was a short film and not a full-fledged film, so my mother said it was a 20-minute thing about only a female orgasm. That will make sense if you are doing a 20-minute thing in a full-fledged film. I don’t think there’s anything wrong. As Karan said, if he had talked to my mother, it would have been all right,” Kriti Sanon stated in the same interview.

The brilliant actress is at the top of her career and has some very intriguing projects. Next up for Kriti Sanon is the coming horror comedy Bhediya, which stars Varun Dhawan as the lead character. Kriti is also starring as Janaki, the female lead, in the upcoming blockbuster Adipurush, which stars Prabhas in the lead role. She will soon be seen with well-known actor Shahid Kapoor in an untitled romantic comedy.