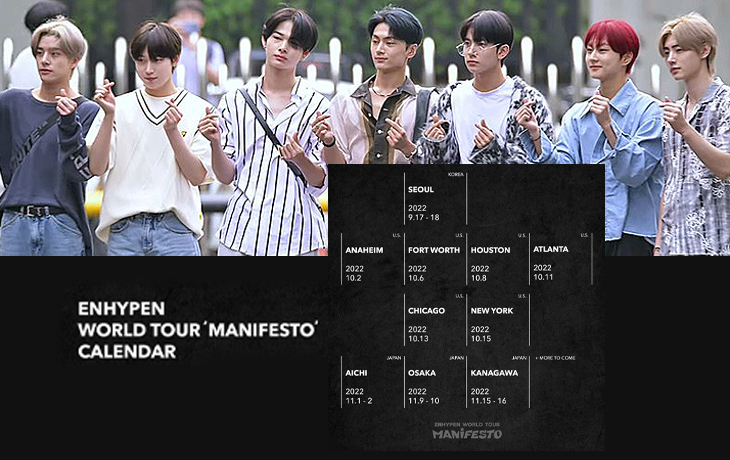 There will be a tour by ENHYPEN! The initial batch of dates and locations for the upcoming BELIFT LAB boy band’s first globe tour was formally revealed on July 8. The tour, named “MANIFESTO,” will kick off in Seoul, South Korea, in September with two shows on September 17 and 18. From there, ENHYPEN will go to the U.S.

Currently, ENHYPEN will visit six different cities in the United States throughout October, including Anaheim on October 2, Fort Worth on October 6, Houston on October 8, Atlanta on October 11, Chicago on October 13, and New York on October 15.

With concerts scheduled for Aichi on November 1 and 2, Osaka on November 9 and 10, and Kanagawa on November 15 and 16, ENHYPEN will visit Japan in November. Additionally, the group’s management company, BELIFT LAB, has hinted that additional cities and dates for the next “MANIFESTO” tour may be revealed.

BELIFT LAB wrote in the tour announcement: “ENHYPEN’s coming to you with their first world tour, ENHYPEN WORLD TOUR ‘MANIFESTO’. Starting with the Seoul concert, ENHYPEN will meet global engines in the U.S., Japan, and more, through the ENHYPEN GLOBAL TOUR ‘MANIFESTO’. We’ll be looking forward to your love and support.”

On July 4, ENHYPEN released their third mini-album, “MANIFESTO: DAY 1,” and a music video for the album’s title song, “Future Perfect (Pass the MIC).” With this, the band beat their record for first-day sales, selling 768,603 copies of the new album (according to Hanteo). This release follows the group’s earlier comeback with the publication of their first repackaged album, “DIMENSION: ANSWER,” in January of this year.