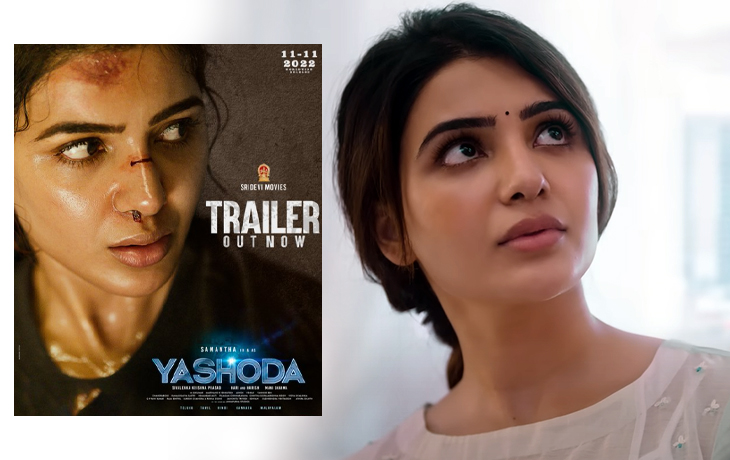 The next movie Samantha Ruth Prabhu will appear in is Yashoda, which has been eagerly awaited since it was revealed. The eagerly anticipated movie trailer has been released in Hindi and all South languages. Yashoda, directed by Hari Shankar and Harish Narayan, is a gritty, edge-of-your-seat action thriller in which you play a surrogate.

Samantha is shown in the trailer playing the surrogate mother, Yashoda, who boldly exposes the secrets of a severe medical crime. In addition to the action scenes and extremely thrilling elements, the teaser also depicts a brief romance between Samantha and Unni Mukundan.

Samantha posted the trailer on social media, “The first time I heard this script, it gave me chills… I hope you experience the same!!11-11-2022.”

The trailer for Samantha’s debut pan-Indian film, Yashoda, has been made available in Tamil,  Telugu, Kannada, Malayalam, and Hindi. The trailer was premiered in Telugu by Vijay Deverakonda, Tamil by Suriya, Kannada by Rakshit Shetty, Malayalam by Dulquer Salmaan, and Hindi by Varun Dhawan.

Yashoda will be available in Telugu, Tamil, Malayalam, Kannada, and Hindi on November 11. With Yashoda, Samantha will be making her Bollywood film debut.

The legendary movie Shaakuntalam, in which Samantha plays princess Shakuntala, is Samantha’s upcoming project. The film, directed by Gunasekhar, was supposed to premiere on November 4, but it was postponed. The makers have announced that Shaakuntalam will now be published in 3D, and a new launch date will be revealed shortly. She will also co-star with Vijay Deverakonda in the upcoming movie Khushi, which will be released in December. This is her second movie with the Liger star following Mahanati (2018).