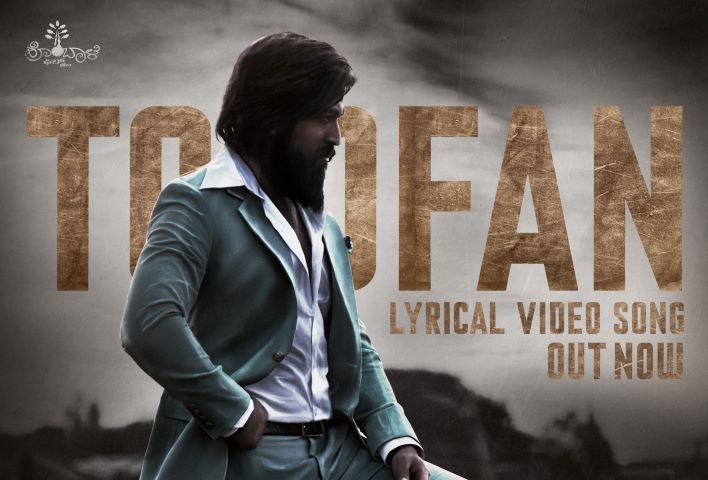 ~ The first of song KGF: Chapter 2 – ‘Toofan’ reintroduces the commander ’Rocky’ in all his glory~

Bengaluru, March 21, 2022: Hombale Films, one of India’s premier film production companies, today launched the first song of the most anticipated film of the year, the mega canvas action-entertainer K.G.F: Chapter 2. Titled “Toofan”, Rocky’s anthem reintroduces the enigmatic messiah in a thrilling avatar. The launch of the song marks the beginning of a month-long countdown of this highly anticipated action saga.

The lyrical video begins with some gripping visuals, teasing audiences and giving them a sneak peek of all the action-packed entertainment in store for them with K.G.F: Chapter 2. With the record-breaking success of the first film, Hombale Films announced the release of the sequel that will be out in theatres nationwide on April 14, 2022.

The wait is finally over for the fans, as the film’s first song is out showcasing the glimpse of the bonanza that’s going to be unfurled at the release of the movie. The song ‘Toofan’ reminisce about the past and takes us back to the original blockbuster that achieved cult status and was the highest-grossing Kannada film of all time.

Known for its cutting-edge special effects, action sequences on par global standards, next-level cinematography and of course the legendary performance by Yash, who became synonymous with character Rocky almost overnight, K.G.F Chapter 2 also promises to carry the legacy ahead and out-do itself with a heavyweight ensemble star cast including Sanjay Dutt, Srinidhi Shetty, Raveena Tandon and Prakash Raj.

Speaking on the launch, Vijay Kirangandur, Founder, Hombale Films, said: “We are extremely delighted to launch ‘Toofan’, Rocky’s anthem that will set the tone for the second instalment of KGF. We at Hombale Films are excited to re-introduce the most iconic characters of recent times to the fans. He is the driving force that ignited a revolution, and the title of the song is a perfect reflection of this enigmatic leader. With the phenomenal success of the first part, our Director Prashanth Neel has tried to level up the scale of the movie which will definitely provide an enthralling movie experience to our fans. Our music maestro Ravi Basrur has ensured to capture every emotion in his background score. I’m sure the fans will be thrilled to say the least”.

The period action film written and directed by Prashanth Neel, and produced by Vijay Kiragandur under the banner Hombale Films is all set to release nationwide on 14th April,2022. The film will be released in Kannada, Telugu, Tamil, Hindi, and Malayalam. One of the emerging pan India production houses, Hombale Films is all set to bankroll some of the biggest projects of the industry in the next two years. Hombale films is also the producer of their 3rd pan India movie with Prabhas’ titled ‘Salaar’. Prashant Neel, one of the most sought-after directors, who created a bang in Indian cinema with the massive hit KGF-Chapter 1, will be directing the movie.

Hombale Films is a quality Movie Production House founded by Mr Vijay Kirangandur and Chaluve Gowda. Hombale Films was founded to create compelling content for Kannadigas on both at domestic as well as global scale. Hombale has consistently produced critically acclaimed blockbusters from Raajakumara to KGF: Chapter 1. Hombale Films has been instrumental in breaking the stereotype regarding the South Indian Production houses and created a niche for itself by delivering films that have been acclaimed nationally. With the release of the second instalment of KGF, the production house is going to get bigger and better from here.