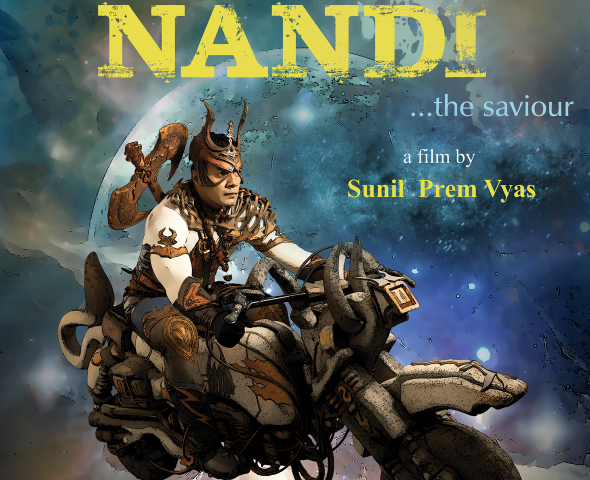 The world will be introduced to a new animation genre known as 2 ½ D. Nandi – The Saviour is the first film to introduce this new approach, according to Sunil Prem Vyas, the film’s writer and director.

March 14, 2022, Mumbai: We all always enjoy watching animated films, and parents want their children to see as many as possible in order to help them learn. What could be better than an animated film based on Indian mythology? On the auspicious day of Mahashivratri, Sunil Prem Vyas, the film’s writer-director & co-founder of Rudra Darpan Arts, along with Rudralife’s founder Tanay Seetha hosted a powerhouse Teaser and Poster Launch for the upcoming animation film, Nandi – The Saviour, which is inspired by Indian mythology but set in modern times and will be India’s first 2 ½D animation superhero film. The entire cast of the film was present for the occasion.

When the invitees first saw the teaser, they all felt chills since the quality and execution of the entire teaser with such an excellent vision is praiseworthy. People were seen enjoying the entire event since it had a well-balanced mix of entertainment, surprises, and crowd excitement, all of which contributed to the event’s success, exactly like the teaser and poster. More specifically, the teaser has presented the coolest avatars of the Antagonist and Protagonist, as well as the other characters.

Sunil Prem Vyas, the personality behind such an inspirational genre in the animation industry, is an award-winning filmmaker & Actor known for portraying 17 various characters in “The Artist Within” (Cannes fame) also known for having received the “Dadasaheb Phalke Janmbhumi puraskar” for his movie “Take it Easy” (which was loved by everyone around the globe with 8.2 IMDB ratings.). His other films are “Galti Se Mistake Ho Gayi”, and “Gandhi Ki Zameen Par”. He also acted in and wrote a 45-minute short film that received praise from India’s former president, Dr. A.P.J. Abdul Kalam.

He is a well-known figure in the world of theatre. He has acted in over 27 plays, 11 of which he authored, and two of which were transcripts.

He immersed in micro-managing the creation of 1st time ever 2.5 D animation movie Nandi-the saviour. He mentioned during the event that he had days when he was sick, but pushed himself and made sure he was on top of his creativity and efficiency.

Mr. Vyas is well-known for his meticulousness, dedication, and meticulous attention to detail in all he does as an actor and filmmaker. He states that “I feel blessed to be born as a filmmaker in today’s era when the technology has reached to a level that whatsoever the filmmaker imagines can be achieved onscreen. What remains is a matter of budgets and time only.”