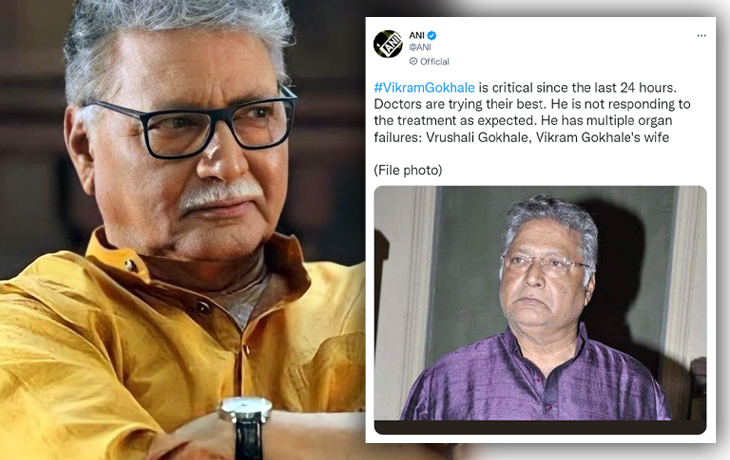 Since the new reports that the renowned actor Vikram Gokhale had been admitted and was in critical condition, fans have seemed quite worried and have been praying for his rapid recovery. In the middle of this challenging situation, some news sources reported that Gokhale had passed away. The actor is still alive, though, and is being cared for by qualified medical professionals, according to the latest update, which Gokhale’s family confirmed.

As a result, many news sources that had earlier reported the actor’s demise have removed those articles from their websites.

News outlet ANI recently updated confirmation of the actor’s health. According to a tweet from ANI, “Veteran Actor Vikram Gokhale is still critical and on life support, and he has not passed away yet. Keep praying for him–confirms Vikram Gokhale’s daughter.”

Vikram’s wife, Vrushali Gokhle, confirmed the actor’s survival in an interview with ETimes. “He slipped into a coma yesterday afternoon, and post that. He has not responded to touch. He is on a ventilator. Doctors will decide tomorrow morning what to do, depending on whether he’s improving, sinking, or still not responding,” added Vrushali.

A further statement by Vrushali Gokhale was that Vikram Gokhale had been a patient at Deenanath Mangeshkar Hospital since November 5. “He improved but slipped again and has had various issues, like in the heart and kidneys. At the moment, he has had a multi-organ failure,” she added.

Wednesday morning, the Press Trust of India revealed that the actor had been admitted to the hospital due to health concerns.

“Veteran film, television and stage actor Vikram Gokhale has been admitted to a city-based hospital following health complications,” doctors claimed, according to PTI.

“The doctors, however, refused to reveal any further information and said Gokhale’s family will give an update on his health status,” reported PTI.

The most prominent roles that Vikram Gokhale has played are those in the movies Hum Dil De Chuke Sanam (1999), Agneepath (1990), Mission Mangal (2019) and Bhool Bhulaiyaa (2007), to name a few. These movies were huge box office successes back then and remain beloved now.