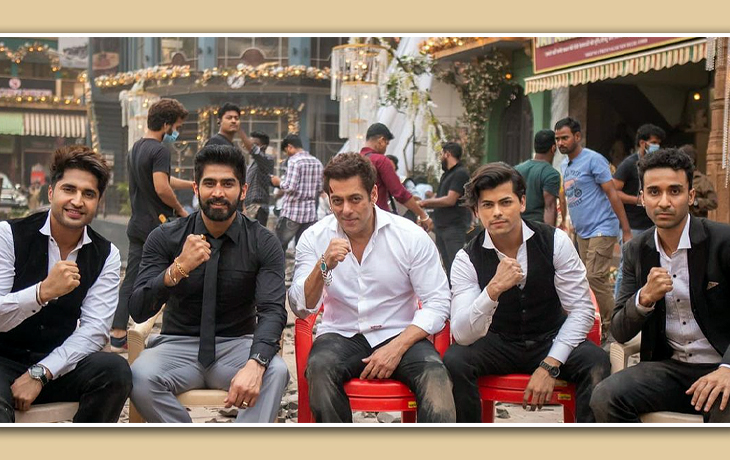 Fans of Salman Khan have been anticipating news about his upcoming movie Kisi Ka Bhai Kisi Ki Jaan with bated breath. After Salman Khan announced the movie in August as he celebrated 34 years in the film industry, it received much attention on the internet. Salman was seen driving a Cruiser motorcycle and walking through the Ladakh valley in the teaser, which the superstar had revealed alongside the official title logo for Kisi Ka Bhai Kisi Ki Jaan. After that, Salman also surprised fans with his brand-new avatar from the movie on the festival of Dussehra. Now, the celebrity has revealed yet another behind-the-scenes photo from Kisi Ka Bhai Kisi Ki Jaan’s sets while revealing that boxer Vijender Singh has joined the film’s cast.

Salman Khan posted a photo from his set of Jassie Gill, Vijender, Raghav Juyal and Siddharth Nigam on his Instagram account to celebrate Vijender Singh’s birthday. They are all seen in the photo holding up their fists. Salman Khan looks classy in a white shirt with black jeans, and Vijender Singh is spotted seated next to him, wearing a black shirt and grey pants. Salman Khan posted an image from the Kisi Ka Bhai Kisi Ki Jaan set and commented, “Happy bday hamare boxer Bhai @singhvijender .. Welcome on board #KisiKaBhaiKisiKiJaan … @jassie.gill @thesiddharthnigam @raghavjuyal.”

Salman Khan, Pooja Hegde, and Venkatesh play the main characters in Farhad Samji’s action-packed comedy. A pan-Indian ensemble cast is also featured in the film. Salman Khan recently stated that Ram Charan, a famous actor from the South, would make a cameo appearance in the movie. According to Salman’s recent announcement, Kisi Ka Bhai Kisi Ki Jaan will be released on big screens on Eid 2023.