Vijay Deverakonda Teams Up With Puri Jagannadh For ‘JGM’ 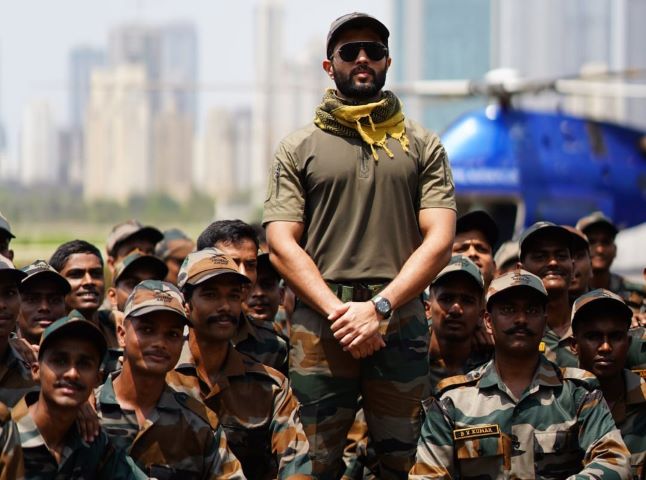 Vijay Deverakonda has announced his next project with director Puri Jagannadh. The film is titled JGM, reportedly its short form of Jana Gana Mana. It will mark the actor and director’s second collaboration with each other. JGM has been touted as an action drama.

Vijay shared the film’s new poster as well as the motion poster on his Twitter handle.

Film’s motion poster shows a team of paratroopers descending into India, which has been turned into a battleground.

Vijay also shared some of the pictures from the film’s set and captioned them, “More madness. The next one year of my life. #JGM Worldwide Release – Aug 3, 2023.”

In the pictures, Vijay, dressed in a military uniform, arrived in a chopper at a helipad filled with people in soldiers’ costumes.

As per the ANI report, speaking about the project, Vijay said, “I am supremely excited about JGM. It’s one of the most striking and challenging scripts. The story is special, and it will touch every Indian. I am honoured to be a part of Puri’s dream project. Looking forward to working with Charmme and her team. My character in JGM is refreshing, which I haven’t done earlier, and I am sure it will leave an impact on the audiences.”

Written and directed by Puri Jagannadh, and produced by him, Charmme Kaur and Vamshi Paidipally. JGM will release in Hindi, Telugu, Tamil, Kannada and Malayalam. The film’s shoot will commence in April 2022, and the film is set to hit theatres on August 3, 2023.

Varun Dhawan Announces His Next Film Bawaal With Janhvi Kapoor