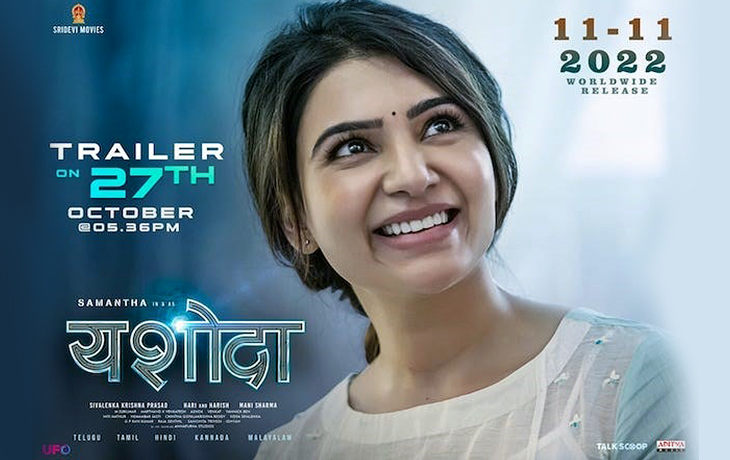 The top Superstars in India get together to present the teaser as Samantha, a pan-Indian female Superstar, prepares for her maiden Hindi theatrical release, Yashoda, on October 27. The list includes Varun Dhawan in Hindi, Suriya in Tamil, Rakshit Shetty in Kannada, and DulQuer Salman in Malayalam.

The biggest female-led pan-Indian theatrical release Yashoda has generated a lot of talks. The film’s creators are doing everything they can to raise anticipation as the trailer will be presented nationally with some of the biggest stars in the Indian entertainment sectors.

Samantha is getting ready for her first appearance in Hindi theatres with Yashoda after becoming a national celebrity thanks to the success of her song “Oo Antava” from Pushpa and winning praise for her outstanding performance in the highly renowned show “The Family Man.”

The teaser for the movie, released earlier, introduced the audience to Samantha’s character Yashoda and captured everyone’s interest with its dark and suspenseful backdrop of a pregnant lady battling against all obstacles.

Playing a gritty Pregnant role in this edge-of-the-set Action Thriller, a glimpse of Samantha’s Action stunts as Yashoda stunned everyone earlier.

Directed by Hari and Harish, Yashoda is produced by Sivalenka Krishna Prasad under the banner of Sridevi Movies and is set to release on November 11 2022.

It’s A Working Birthday For Actress Kritika Kamra; Shooting Netflix’s For Your Eyes Only

On Dileep’s birthday, Tamannaah Bhatia gives his first glimpse of the movie