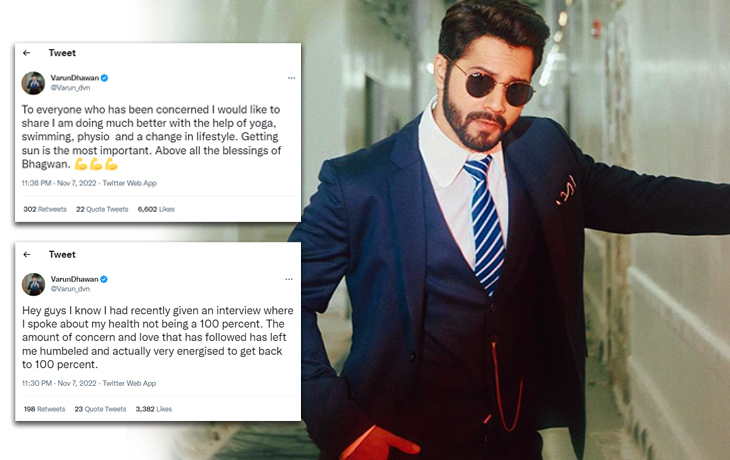 Varun Dhawan, a Bollywood actor, is now very busy promoting his forthcoming movie Bhediya. Dhawan and Kriti Sanon play the lead roles in the film, helmed by Amar Kaushik. It will debut in theatres on November 25 and is produced by Dinesh Vijan. Varun recently disclosed his health issue and his struggle with Vestibular Hypofunction in the middle of such huge-scale promotions.

A few days back, the actor from Badlapur revealed that he has a rare health issue called vestibular hypofunction, which prevents the inner ear’s balance mechanism from working correctly.

Varun said he is doing much better than previously and thanked his admirers and well-wishers for that in the latest update on Monday evening.

In a tweet, Varun said, “Hey guys, I know I had recently given an interview where I spoke about my health not being 100 per cent. The amount of concern and love that has followed has left me humbled and very energized to get back to 100 per cent.”

“To everyone concerned, I would like to share I am doing much better with the help of yoga, swimming, physio, and a lifestyle change. Getting sun is the most important. Above all, the blessings of Bhagwan,” Varun tweeted.

Varun stated to India Today how things in life have transformed since COVID-19. “The minute we opened doors, don’t you think we returned to the same rat race? How many people here can say that they have changed? I see people working even harder! In fact, I started pushing so much harder (with) my film JugJugg Jeeyo that it felt like I was running for an election. I don’t know why, but I put so much pressure on myself.”

Additionally, he said, “Recently, I just shut down. I didn’t know what had happened to me. I had this thing called vestibular hypofunction, (where) your balance goes off. But I just pushed myself so hard. We are just running in this race, and nobody is asking why. I think there is a greater purpose (why) we are all here. I am trying to find mine, and hopefully, people will find theirs.”

While on the Workfront, Dhawan will next appear in Nitesh Tiwari’s action movie Bawaal alongside Janhvi Kapoor.

Freddy’s teaser is out! Kartik Aaryan appears as a spooky dentist in a new thriller