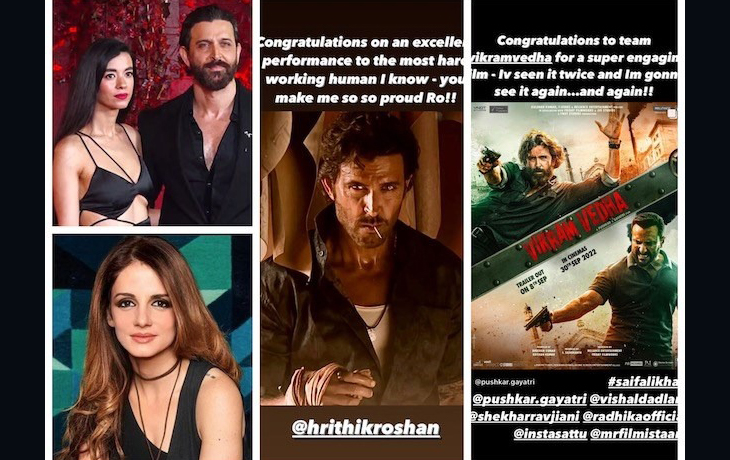 Sussanne Khan, Hrithik Roshan’s ex-wife, and Saba Azad, his girlfriend, have nothing but appreciation for the actor’s work in the just-released action-thriller movie “Vikram Vedha.”

Ex-wife Sussanne Khan took to her social media profile and complimented the actor and the film. She shared, “RA RA RA RA…Rooooom this is by far one of my favourite movies ever!!! Superbly gripping and full of Thrillssss!! Congratulations @hrithikroshan @saifalikhan_online and the entire team… for this tremendous entertainer!!! This one is going to be a huge BLOCKBUSTER.”

Actor Hrithik Roshan has been dating model, singer, and actress Saba Azad since their breakup with Sussanne Khan.

Saba took to her social media profile and posted two stories appreciating the actor. She wrote, “Congratulations on an excellent performance to the most hard-working human I know – you make me so so proud, Ro!!.”

In the following story, Saba shared a picture of ‘Vikram Vedha’ and wrote, “Congratulations to team #vikramvedha for a super engaging film – iv seen it twice, and I’m gonna see it again…and again!!.”

The film “Vikram Vedha,” directed by Pushkar and Gayatri and featuring Saif Ali Khan and Radhika Apte in the key roles, is currently enjoying favourable reviews from viewers.

As a fierce officer named Vikram sets out to follow and pursue a feared mobster named Vedha, the plot of “Vikram Vedha” is full of unexpected turns. A cat-and-mouse game ensues, with Vedha, a skilled storyteller, assisting Vikram in removing layers through a succession of tales that lead to perplexing moral difficulties.

IIFA To Pay Tribute To Amitabh Bachchan On His 80th Birthday