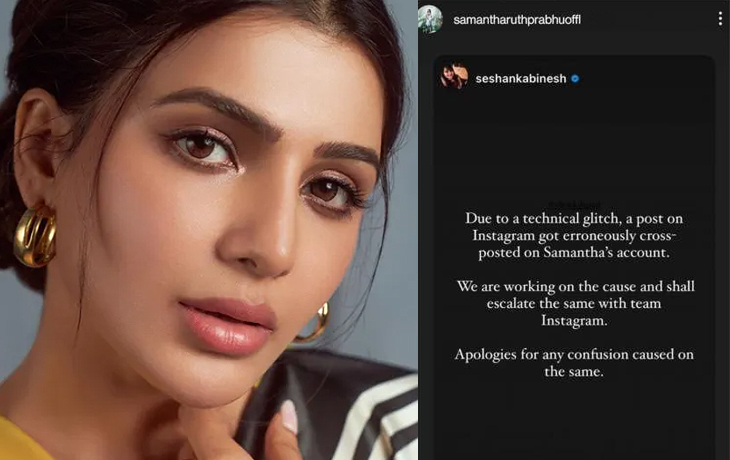 The actress’ management is sorry after an odd post was uploaded on her profile.

Samantha is a persistent social media user and frequently posts about her daily life on her Instagram account. The actress’s most recent Instagram post, which was unique and had nothing to do with her, sparked controversy. Soon after, followers concluded that Samantha’s Instagram account had been hacked, which is why the nasty message was posted on her page.

As fans snapped screenshots of the unusual post and uploaded it online, it quickly gained popularity. Samantha’s digital manager Seshanka immediately apologised and clarified the situation. They released a statement explaining that a “technical error” caused an Instagram post to be cross-posted to her account.

“Due to a technical glitch, a post on Instagram got erroneously cross-posted on Samantha’s account. We are working on the case and shall escalate the same with team Instagram. Apologies for any confusion caused on the same,”. In an Instagram Story, she wrote. Samantha also later shared it on her Instagram Story.

In a while, Samantha has a tonne of movies booked for work. Shaakuntalam, her upcoming mythological film, is now in the post-production stage and will be released shortly. Dev Mohan plays the lead character in the Gunasekhar-directed movie, and Allu Arjun’s daughter Arha is making her Tollywood debut. She just wrapped up filming for the Shiva Nirvana-directed Telugu romantic flick Kushi, in which she co-stars with Vijay Deverakonda. Yashoda is another pan-Indian movie starring the actress.

The actor’s agency replies to allegations made against Nam Joo Hyuk of sexual harassment and bullying at school by a third party.