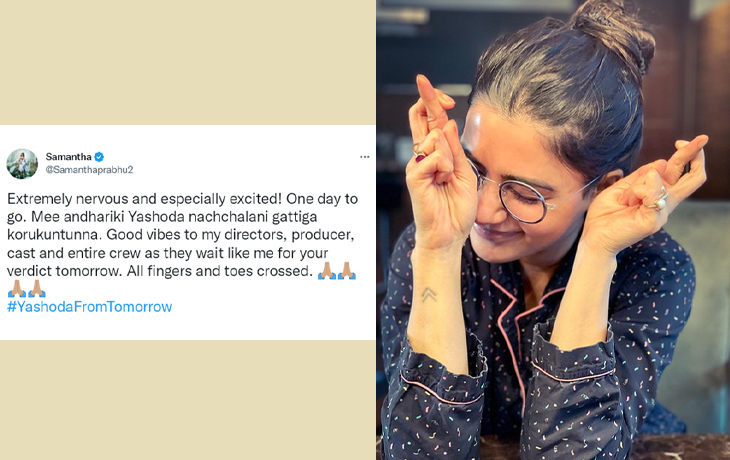 The premiere of Samantha Ruth Prabhu’s next movie Yashoda, which is scheduled to open in theatres this Friday, November 11, is coming. Samantha posted a photo the day before the big film and wrote that she is “nervous and excited” for Yashoda to be released. Additionally, she crossed her fingers, hoping that people would like her.

Samantha posted a picture of her on social media along with her fingers crossed and a smile. She said, “Extremely nervous and especially excited! One day to go. Mee andhariki Yashoda nachchalani gattiga korukuntunna. Good vibes to my directors, producer, cast and entire crew as they wait like me for your verdict tomorrow. All fingers and toes crossed. #YashodaFromTomorrow.”

Yashoda, directed by Hari Shankar and Harish Narayan, is a gritty, edge-of-your-seat action thriller in which Samantha plays a surrogate. In the movie, Samantha will play Yashoda, a surrogate mother who bravely reveals the realities of a severe medical crime.

On November 11, Yashoda will be released in Tamil, Telugu, Kannada, Hindi and Malayalam. With Yashoda, Samantha will make her debut in Hindi theatres.

Samantha’s upcoming project, the mythological movie Shaakuntalam, portrays her as the princess Shakuntala. The film, which Gunasekhar directed, was expected to be released on November 4 but was delayed. Shaakuntalam will now be released in 3D as per the makers. Soon, a new premiere date will be disclosed. Additionally, she will appear in Kushi, set to hit theatres this December, alongside Vijay Deverakonda. After Mahanati (2018), this is her second movie with the Liger star.

Vijay Deverakonda heals from a shoulder injury after eight months