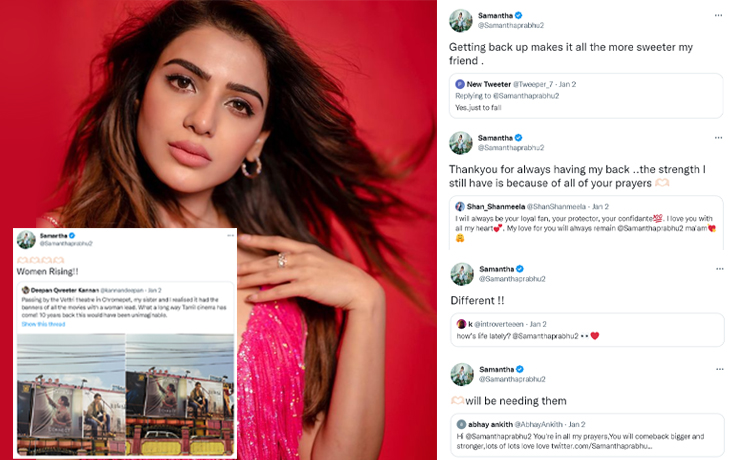 Samantha Ruth Prabhu is a strong, courageous woman who never gives up. She has dealt with many trolls throughout her career, which spanned over two decades. The diva has always been able to quiet them with appropriate responses, though. She recently chose to respond to specific tweets that were directed towards her. Women rise “just to fall”, one online user commented on the microblogging website. She replied, “Getting back up makes it all the more sweeter, my friend,” in response.

When a different user enquired, “how’s life lately? @Samanthaprabhu2”, the actress replied, “Different!!. On her wall, another user commented, “I will always be your loyal fan, your protector, your confidante. I love you with all my heart. My love for you will always remain @Samanthaprabhu2 ma’am.” She responded, “Thank you for always having my back ..the strength I still have is because of all of your prayers.”

She also got the Tweet, “Hi @Samanthaprabhu2 You’re in all my prayers, You will come back bigger and stronger, lots of lots love love”, and Samantha said, “will be needing them.”

The actor previously disclosed that she is struggling with the autoimmune disease myositis. Having an IV drip on her wrist and herself seated on a couch, she had uploaded a photo to social media.

Samantha last appeared in the movie Yashoda, wherein she featured a surrogate mother who bravely revealed the secrets of a significant medical crime. The mythical drama Shaakuntalam, in which she portrays the title character opposite actor Dev Mohan as Dushyanta, will be her next release. This film is scheduled to hit theatres on February 17, 2023.

Shaakuntalam, a mythical movie starring Samantha Ruth Prabhu, will be released in theatres on THIS date and in 3D