Popular
“Aditya Dhar, You’re The Biggest Blessing In Life,”...
Ajay Devgn And Varun Dhawan Praise Each Other...
Dhanush And Sekhar Kammula Collaborating For A Trilingual...
Exclusive Interview: Ravindra Parekh, a Writer, Poet and...
Tiger 3: Salmaan Khan to reunite with actress...
Tahira Kashyap States that she borrowed money from...
Kartik Aaryan Is Spooky In Freddy’s New Teaser
Mahesh Babu Pens A Heartfelt Note For His...
Ranbir and Alia disclose the name of their...
Anand L Rai on Akshay Kumar’s Raksha Bandhan’s...
Home Bollywood news Salman Khan heads to Bombay Court as a phone snatching complaint was filed by a journalist.
Bollywood newsFeatured

Salman Khan heads to Bombay Court as a phone snatching complaint was filed by a journalist. 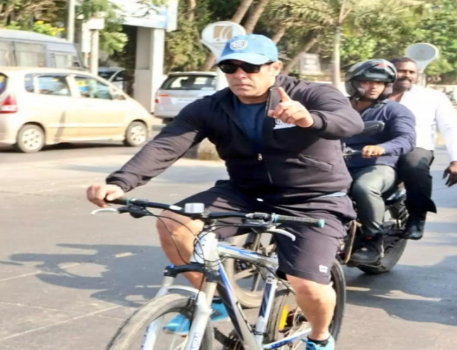 Salman Khan has reportedly sought the Bombay High Court after the Andheri Magistrate Court issued additional summons against him and his bodyguard Nawaz Shaikh in connection with a phone snatching case filed by a Mumbai-based journalist in 2019.

This began when a complaint was made against Khan at the DN Nagar Police Station in Mumbai. The actor was accused of stealing the complainant’s phone when photographing him while cycling on Linking Road.

Salman’s bodyguard had already filed a cross-application against the phone owner, alleging that the actor was being videotaped without his consent. The claimant is a local journalist named Ashok Shyamlal Pandey in this instance. The case was then transferred to the Magistrate Court for further consideration.

Meanwhile, Salman’s latest High Court petition will be considered today by a bench led by Justice Revati Mohite Dere. The petition asks for the case’s summons and other processes from the Andheri Magistrate Court to be settled.