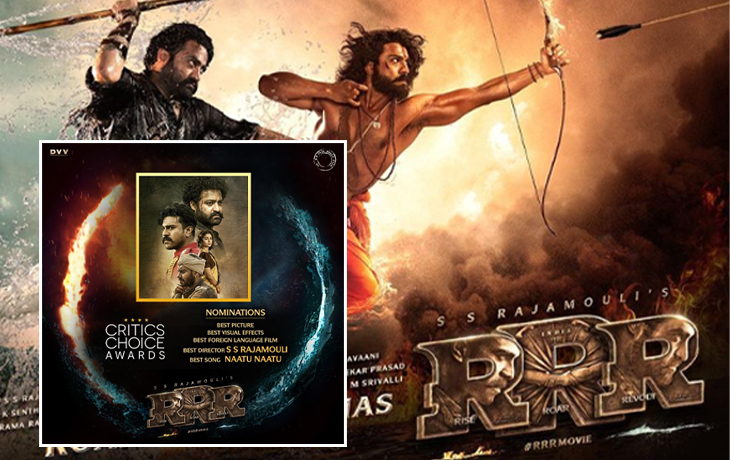 The historical epic drama RRR, which debuted in theatres in March 2022, has received a remarkable amount of appreciation from viewers all over the world. The SS Rajamouli-directed film received overwhelmingly positive reviews from numerous international platforms, received two 2023 Golden Globe nominations, and is anticipated to enter the Oscar race. By receiving five nominations for the renowned Critics Choice Awards 2023, RRR has since made history once more. The makers shared the thrilling announcement via the movie’s official Instagram account.

Ram Charan and Jr. NTR star in the movie, which has received five nominations for the Critics’ Choice Awards 2023, including Best Foreign Language Film, Best Picture, Best Visual Effects, Best Director for SS Rajamouli, and Best Song for “Naatu Naatu.” The RRR creators just shared the exciting news on social media. They are ecstatic about this outstanding achievement. “Another day, another big milestone for RRR… #RRRmovie is nominated in 5 categories for the prestigious Critics Choice awards!!,” on RRR’s Instagram account.

RRR has received outstanding critical acclaim and is regarded as one of the best “commercial” movies ever made by the Indian cinema industry, in addition to doing enormous business. After the SS Rajamouli-directed film failed to be selected as India’s official entry, the RRR creators decided to enter the Oscar competition independently. In the meantime, SS Rajamouli won the movie, taking home the prestigious New York Film Critics Circle award for Best Director. RRR has received two nominations for the 2023 Golden Globes, one each for Best Song and Best Foreign Language Film.

Did Tina Datta and Sreejita De resolve their problems on Bigg Boss 16?