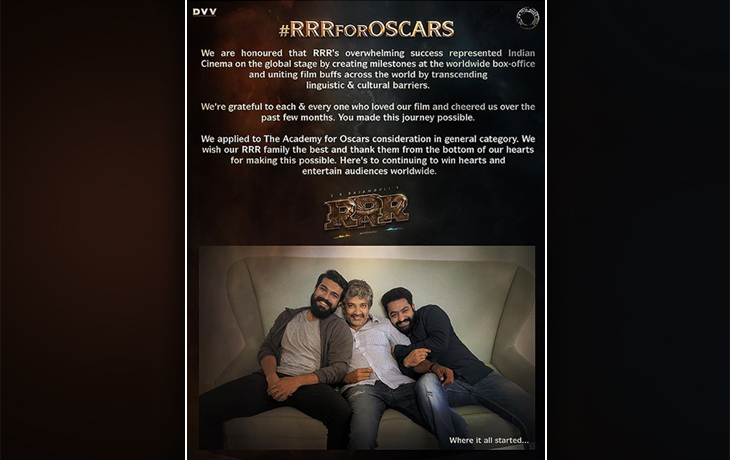 The producers of RRR have officially applied for the general category at the Oscars, acknowledging its enormous success and widespread demand. The group publishes a statement expressing their appreciation and hope for the situation.

The RRR movie’s official Twitter account has released a statement regarding its Oscar nominations. The note read, “We are honoured that RRR’s success represented Indian Cinema on the global stage by creating milestones at the worldwide box office and uniting film buffs worldwide by transcending linguistic and cultural barriers.

We appreciate everyone who has supported us over the past few months and shown affection for our movie. You made it feasible for us to travel.

We submitted an application to The Academy for general category Oscar consideration. We send our best wishes to the RRR family and are grateful to them for making this possible. The entire note was read: “Here’s to continuing to win hearts and delight audiences around.

The story’s focus is on two actual Indian rebels, Alluri Sitarama Raju (Charan) and Komaram Bheem (Rama Rao), along with their struggle against the British Raj.

The 1920 setting of the novel centres on the untold period of their lives when both revolutionaries opted to live in secrecy before waging war for their country.

Bones And All Trailer Is Out, Starring Timothée Chalamet