Rashmika Mandanna’s most recent photo of her pets Aura and Snow waiting for her is the prettiest thing you’ll see today. 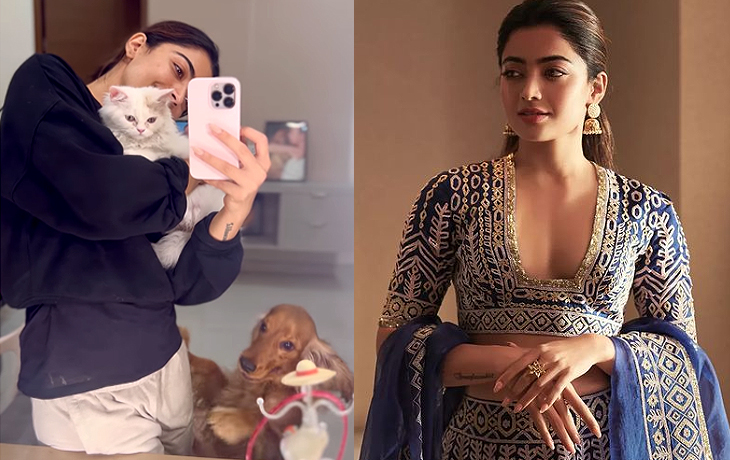 Aura and Snow, Rashmika Mandanna’s kitties, were captured in a cute Instagram photo. The actress has a pet cat named Aura, and she loves animals. She also released a video yesterday welcoming her new pal, Snow, to her fans and followers on social media. A cute picture of her pets was uploaded on the story page a little later. In the photo, Aura and Snow could be seen sitting on her bed, waiting for her to get into bed. Rashmika shared the image along with a charming caption that read, “How they both were waiting for me to get to bed…ok you know what..Imma cry now (teary-eyed emoji) my heart is so fulllllllll! (Pink heart with arrow emoji) #aura (pink heart emoji) #snow”.

The Pushpa actress posted a video on Instagram yesterday showing her carrying her new pet, baby Snow in her hands as she attempted to take a mirror selfie with Snow. Aura was observed requesting Rashmika’s attention in the meantime. She could be seen trying to divert them both to take a picture. She captioned the image while sharing the picture, “Everyone… introducing Snow! I think in 3 more years, my house will turn into a Lil jungle.”

Rashmika is presently engaged in three Bollywood productions. The actress will share the screen with Sidharth Malhotra in the movie Mission Majnu. She also has Goodbye with Amitabh Bachchan, in addition to this. Alongside Ranbir Kapoor, the actress will also be seen in Sandeep Reddy Vanga’s Animal.

To explain his vision and nature’s forces, Ayan Mukerji delves deeply into the Astra Verse: Brahmastra

In love with Kim Kardashian, Pete Davidson reveals that becoming a father is one of his dreams.