Rashmika Mandanna and Vijay Deverakonda are thrilled about the movie Baby, directed by Anand Deverakonda 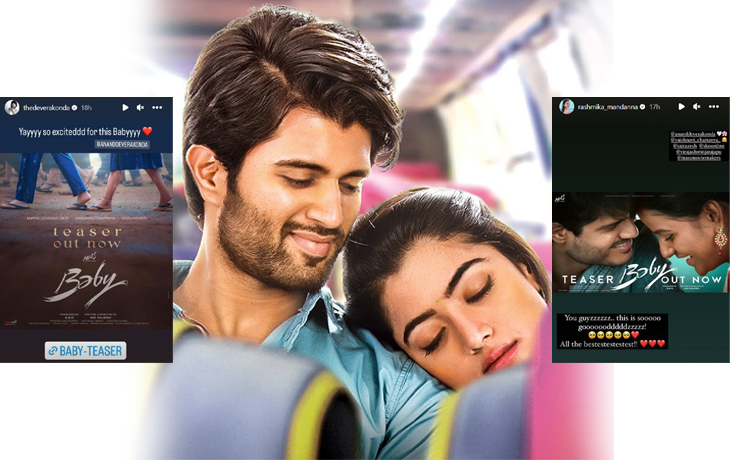 Rashmika Mandanna and Vijay Deverakonda are some of Telugu cinemas most adored on-screen couples. The well-known actors who appeared together in the loved movies Dear Comrade and Geetha Govindam are rumoured to be dating. The rumoured pair frequently leaves hints in their social media posts with each other, even though Vijay and Rashmika have been keeping quiet about their bond. The actor and the family of the Liger celebrity get along well.

Anand Deverakonda, the younger brother of Vijay Deverakonda and a rising star in the acting industry, will next be seen in the romantic drama Baby. Recently, the movie’s official teaser was revealed, and viewers responded well. Vijay Deverakonda posted the official trailer on his Instagram account and stated his excitement for Anand’s upcoming movie,  “Yayyyy so excited for this Babyyyy @ananddeverakonda. Love this.”

On the other hand, Rashmika Mandanna posted the Baby teaser on her Instagram account along with a special note for Anand Deverakonda and the cast and crew of the movie. “You guyzzzzzz… This is so good! All the bestestestesttest!!,” Rashmika stated in her story.

Baby billed as a romantic drama, stars the young actor as a young man from a small town. The other two significant people in the Rajesh-directed film are Viraj Ashwin and Vaishnavi Chaitanya. It is clear from the teaser that Baby depicts the beautiful love story of two youngsters, Vaishnavi Chaitanya and Anand Deverakonda.

The brilliant actor, who was recently seen in the Indian sports drama Liger, took a little break after the film’s failure at the box office. With the upcoming romantic comedy Kushi, which features his reunion with Samantha Ruth Prabhu, Vijay Deverakonda is now ready to make a remarkable comeback. In contrast, Rashmika Mandanna has an extensive schedule that includes the Bollywood flicks Mission Majnu and Animal, as well as Pushpa 2 and Varisu.

Drishyam 2 Box Office Collection Day 3: Hits A Fantastic Sunday, Has A Chance to Earn 100 Crores In A Week Flat