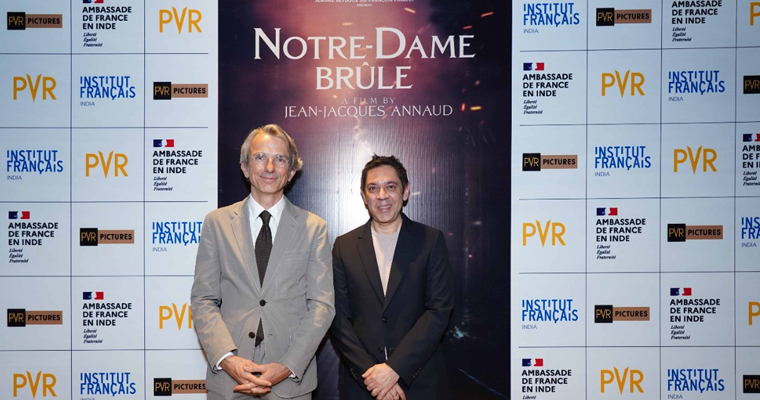 New Delhi, 16th June’22: PVR Pictures, the distribution arm of PVR Limited has entered into an institutional partnership with the French Embassy in India for promoting the cultural diversity of France in India by showcasing French movies, a powerful medium of expression. The First among a multi-city event was held at New Delhi at PVR Director’s Cut, Vasant Kunj today through a special screening of PVR Pictures’ release, ‘Notre-Dame On Fire’, a French movie (with English sub-titles). The movie was screened as part of a special invitation extended by H.E. Emmanuel LENAIN, Ambassador of France to India.

Notre-Dame On Fire’ is an internationally applauded French language film based on the Notre-Dame cathedral fire of April 15 2019. It will be released all over India in selected theatres on Friday June 24 in its French version with English subtitles. Directed by Oscar winning filmmaker Jean-Jacques Annaud, the film is a PVR Pictures release and comes at a time when international entertainment content and multi-Indian language dubbed Hollywood movies are creating a lot of traction in India with a huge following. PVR Pictures had recently brought the magic of K-Pop sensational band ‘BTS (Bangtan Sonyeondan) Permission to Dance on Stage to India through a live screening of their concert from Seoul, South Korea.

Marking the occasion, His Excellency Emmanuel Lenain, Ambassador of France to India said, “France and India are partners in creativity and innovation. That is why India’s participation in the 2022 Cannes Film Festival as guest of honour of the Marché du Film was such a success. We want to bring our audiences, our artists and our film industries closer together. The Embassy of France appreciates the efforts of PVR Pictures in bringing French cinema to India for the enjoyment of Indian and French audiences. French is the most sought-after foreign language for Indian students. Promoting French cinema also helps in strengthening connections and cultural cooperation between the two countries”.

The film reiterates PVR Pictures’ sustained engagement with global producers towards bringing the finest of international cinema to Indian audiences, including many remarkable French films. Many of its Oscar nominated films formed a part of the 2022 edition of the 3-week long Oscar Film Festival that PVR hosted in the month of March. Continuing its leadership in independent film distribution space and marking the most significant title commitment to the growing foreign language film market in the country, PVR Pictures content pipeline has created as a strategic response to the impact of the ongoing global pandemic.Mr. Sanjeev Kumar Bijli, Joint Managing Director, PVR Ltd, added, ‘’PVR Pictures is known for bringing International marquee titles in India and ‘Notre-Dame On Fire’ is one such soul stirring title. We are proud to enter into an institutional tie-up with the French Embassy as part of their endeavour to promote cultural exchange programmes between India and France. Through our humble efforts we are striving to promote contemporary French cinema in India and exposing Indian and global audiences who are based in different part of the country by showcasing such films to them in PVR’s pan India cinemas”.

Harry Styles And Emma Corrin In My Policeman