Popular
“Aditya Dhar, You’re The Biggest Blessing In Life,”...
Ajay Devgn And Varun Dhawan Praise Each Other...
Dhanush And Sekhar Kammula Collaborating For A Trilingual...
Exclusive Interview: Ravindra Parekh, a Writer, Poet and...
Tiger 3: Salmaan Khan to reunite with actress...
Tahira Kashyap States that she borrowed money from...
Kartik Aaryan Is Spooky In Freddy’s New Teaser
Mahesh Babu Pens A Heartfelt Note For His...
Ranbir and Alia disclose the name of their...
Anand L Rai on Akshay Kumar’s Raksha Bandhan’s...
Home Bollywood news On Day 1, Bhool Bhulaiyaa 2 is expected to gross between Rs 7 and 10 crores, while Dhaakad Eyes is expected to gross Rs 4 crore.
Bollywood newsFilms 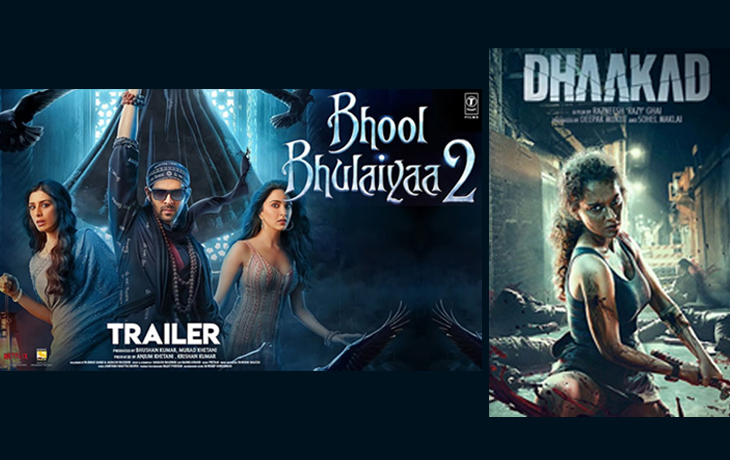 The second clash of the year is expected to take place in Bollywood. Dhaakad and Bhool Bhulaiyaa 2 will release this weekend, putting Kangana Ranaut and Kartik Aaryan in direct competition. While this would be Kartik’s first theatrical release since the Covid-19 pandemic (Dhamaka was released on OTT), Kangana will be making her return to the big screen with Thalaivii.

Dhaakad has yet to lock its screens at the reporting time, while Bhool Bhulaiyaa 2 had already opened booking. As of Tuesday evening, the film has allegedly earned Rs 1.75 crore nett, and the first day accounts for around half of the total collection. The film has already sold about 28,000 tickets for Friday at national chains (PVR, INOX, Cinepolis) and could surpass the 1 lakh mark by Thursday night.

Kangana Ranaut plays the lead in Dhaakad, featuring Divya Dutta and Arjun Rampal. Alternatively, Bhool Bhulaiyaa 2 is the sequel of the 2007 film starring Akshay Kumar and Vidya Balan. Kartik Aaryan plays the desi ghostbuster in Bhool Bhulaiyaa 2, while Kiara Advani plays his love interest. Tabu has a significant role in this film.

That “GROW TOGETHER” kind of love