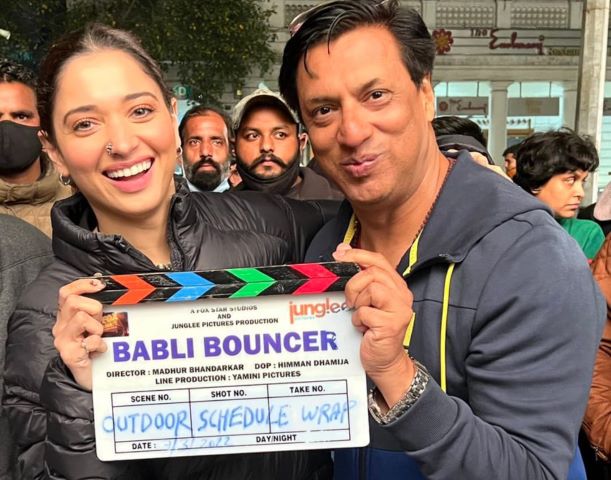 Filmmaker Madhur Bhandarkar has wrapped up the first outdoor shoot of his upcoming Babli Bouncer in Delhi and Punjab. The film starring South star Tamannaah Bhatia in the title role is a fictional saga of a lady bouncer. Jointly produced by Fox Star Studios and Junglee Pictures. The movie will be released later in Hindi, Telugu, and Tamil.

Madhur Bhandarkar shared the news on Twitter and said the first outdoor shoot was an immensely creative and satisfying experience. He wrote, “Finished the first marathon outdoor shoot of #Bablibouncer in #Punjab & #Delhi. It was an immensely creatively satisfying experience. A big thanks to all my actors & technicians. @tamannaahspeaks #BabliBouncer. @foxstarhindi @JungleePictures.”

The film went on floors on February 18. At that time, speaking about the film, Madhur said, “As a filmmaker, there is a lot to be excited for and look forward to, when you get the chance to explore a never-before-told narrative. I want to portray this story of a female bouncer through a slice-of-life comedic tone that also leaves a lasting impact.”

He added, “With the shooting of Babli Bouncer starting today, I’m ready as ever to bring forth this story from the world view of women bouncers. It’s a wonderful story, and I’m absolutely sure Tamannaah will leave everyone surprised with her performance!”

Babli Bouncer is expected to release later this year in three languages, including Hindi, Tamil and Telugu.