Popular
“Aditya Dhar, You’re The Biggest Blessing In Life,”...
Ajay Devgn And Varun Dhawan Praise Each Other...
Dhanush And Sekhar Kammula Collaborating For A Trilingual...
Exclusive Interview: Ravindra Parekh, a Writer, Poet and...
Tiger 3: Salmaan Khan to reunite with actress...
Tahira Kashyap States that she borrowed money from...
Kartik Aaryan Is Spooky In Freddy’s New Teaser
Mahesh Babu Pens A Heartfelt Note For His...
Ranbir and Alia disclose the name of their...
Anand L Rai on Akshay Kumar’s Raksha Bandhan’s...
Home Bollywood news “Living The Dream,” Says Rashmika Mandanna On Working With Big B And Allu Arjun
Bollywood news 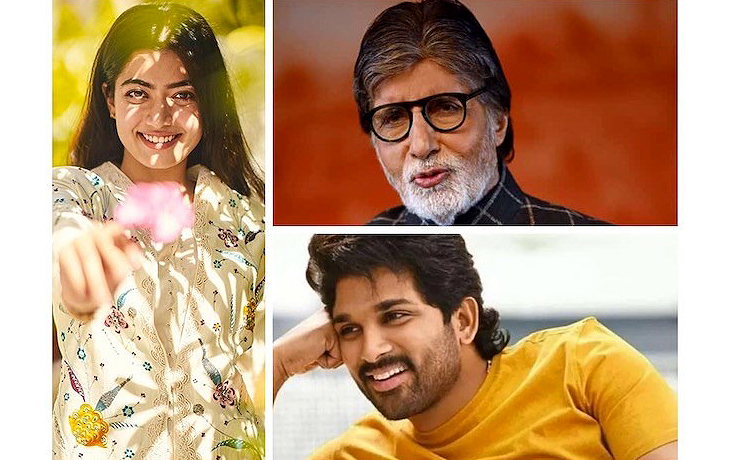 Actress Rashmika Mandanna, who recently enjoyed success with Pushpa, will be making her major Bollywood debut in the upcoming film Goodbye alongside Amitabh Bachchan. She claims she is fulfilling her dream.

During the release of the Goodbye trailer, Rashmika Mandanna engaged with the media.

When asked about working with Allu Arjun in Pushpa and Amitabh Bachchan in Good Bye, the newbie actress Rashmika said, “I am living my dream of working with two icons of Indian cinema.”

Talking about working with Big B and sharing her first encounter with the veteran actor, Rashmika said, “we started shooting on my birthday, and I met him for the first time then. I clearly remember this day as I waited for him since I wanted to say hey. While I was standing in the corner, he crossed me and went away.”

“I wanted to introduce myself, but sir was busy thinking about the scene and what to do and not to do. But finally, I introduced myself and took a breath,” added Rashmika.

Vikas Bahl is the author and director of Goodbye. Amitabh Bachchan and Rashmika Mandanna appear in the Ekta Kapoor and Shobha Kapoor-produced movie, which also has Neena Gupta, Sunil Grover, Pavail Gulati, Ashish Vidyarthi, Elli AvrRam, Sahil Mehta, and Shivin Narang in supporting parts. Bahl and Viraj Savant are also involved in the production. The movie will debut in theatres on October 7, 2022.

Rashmika will also appear in “Mission Majnu” with Sidharth Malhotra and “Animal,” the upcoming film by filmmaker Sandeep Reddy Vanga, with Ranbir Kapoor and Pushpa 2.

“Gadar 2 Is Not A Remake, We’re Taking The Story Forward,” Says Ameesha Patel