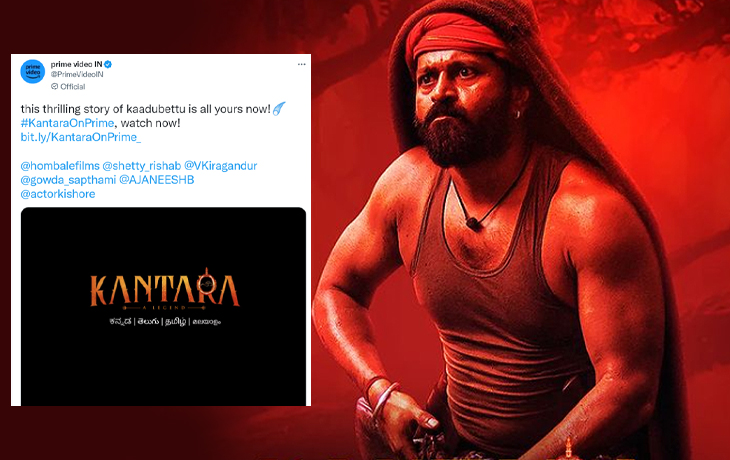 Kantara, directed by Rishab Shetty, has gained popularity in the South film industry. It has entered the A league club alongside Pushpa, Baahubali, KGF, and RRR. Kantara is slated for digital premiere on the OTT platform Amazon Prime Videos on November 24 after successfully playing for 50 days in theatres.

On November 24, Amazon Prime Videos will start streaming the pan-Indian movie Kantara in Telugu, Kannada, Malayalam and Tamil. Rishab Shetty wrote and directed the action-adventure, which Vijay Kiragandur produced under the Hombale Films banner. Rishab Shetty also stars in the film with Kishore Kumar G., Sapthami Gowda and Achyuth Kumar in the film’s major roles. From November 24, 2022, viewers in India and 240 other countries and territories can see the excellent movie they enjoyed so much in theatres at home.

Rishab Shetty, an actor, writer, and director commented on Kantara’s digital release. “Audiences from all corners of the country have showered immense love on Kantara, and I am extremely excited that with its global digital premiere on Prime Video, we will be able to take our labour of love and hard work to a wider audience worldwide. It is a story with universal appeal, but the plot’s local flavour will keep viewers intrigued until the very end!”

Vijay Kiragandur, the producer, added, “At Hombale Films, we are always looking at telling engaging tales in an extraordinary yet relatable manner. Kantara is yet another film by us that has touched the hearts of audiences from varied regions and backgrounds. Rishab and the entire cast and crew have worked incredibly hard to create this beautiful film, and we are delighted to take it to audiences across the globe through the exclusive launch on Prime Video.”

The small community in Kaadubettu, a forest in the southern coastal state of Karnataka, is the centre of the tale of Kantara. He is creating a fantastic story of the battle between humans and nature, where death causes a fight between the villagers, evil forces, and Shiva, a rebel who protects his village and nature.

After films such as RRR, Baahubali and KGF, Rishab Shetty’s film Kantara has become the South film industry’s next big thing. Kantara has gained a lot of popularity and is receiving praise from critics, celebs, politicians, cricket players and audiences.

The A-list film industry members, including Rajinikanth, Prabhas, Anushka Shetty, Ram Gopal Varma, and others, also greatly appreciated the actor and the movie. Superstar Rajinikanth congratulated Rishab Shetty and called the film that hadn’t been made in 50 years.

It is the only second Kannada movie to surpass the 400-crore milestone in gross worldwide collections. And that isn’t the superior achievement it has to offer. The film surpassed all previous records for weekend box office revenue in Karnataka.