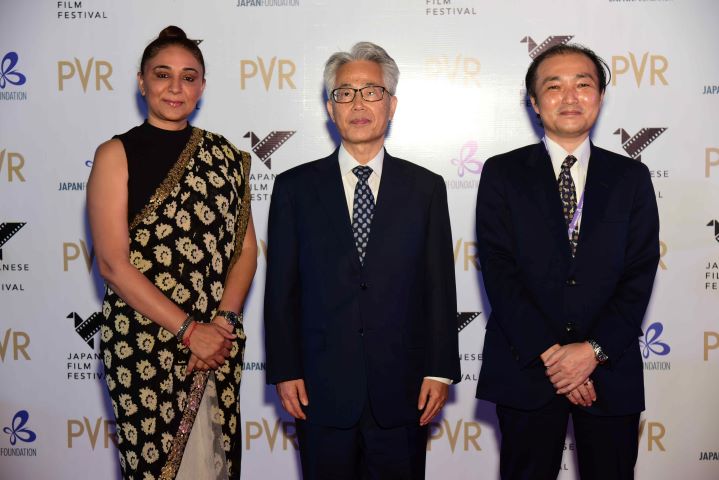 Celebrating Japanese culture through specially curated films; the event witnessed the presence of Mr. Koji Sato, Director General, Japan Foundation New Delhi and His Excellency Satoshi Suzuki, Ambassador of Japan to India, to inaugurate the theatrical edition of the festival in Delhi. Following the inauguration, Mr.  Satoshi Suzuki and Mr. Koji Sato addressed the audience on the developing intercultural relations between India and Japan, especially through films and the collaborations in making JFF-India 2022 possible.

Marking the occasion, Mr. Koji Sato, Director General, Japan Foundation New Delhi said, “We are quite excited to launch the theatrical edition of the Japanese Film Festival 2022 in Delhi, which also marks the 70th Anniversary of the Establishment of the Diplomatic Relations between Japan and India. The success of the online edition of the festival, which ran for two weeks, and the overwhelming response of Indian audience towards embracing Japanese culture have prompted us to bring back the theatrical edition in the city of Delhi.’’

He further added, ‘’Looking at the growing love for Japanese culture and content in India, we aim to promote collaboration between Indian and Japanese film industries. I am sure JFF will help further consolidate the friendship between the people of our two countries by creating avenues for our Indian audiences to seamlessly enjoy these experiences in their everyday lives. Films bring us together from all over the world, and we are here to promote this togetherness.’’

His Excellency Satoshi Suzuki, Ambassador of Japan during the opening ceremony said, “I am extremely delighted to receive an enormous response to the online edition of the festival held in February this year. Japanese film directors are known to deliver spectacular films, and through these cultural exchange programs and films, I am certain that people in India will learn more about our culture. I hope this film festival will help strengthen the friendship between the people of our two countries.’’

JFF-India 2022 aims to strengthen the longstanding relationship between the two nations by offering the Indian audience a glimpse of contemporary Japanese films, culture and lifestyle. The three-day-long Film Festival from 4th-6th March will showcase a diverse line-up of popular Japanese films like Josee, the Tiger and the Fish, Talking the Pictures, Poupelle of Chimney Town, Liar x Liar, Step, Under the Open Sky, Ramayana: The Legend of Prince Rama, Not Quite Dead Yet, Wife of a Spy, AI Amok and The Night Beyond the Tricornered window. The films selected will be screened in Japanese with English subtitles for the viewer’s convenience.

The Japan Foundation is Japan’s only institution dedicated to carrying out comprehensive international cultural exchange programs throughout the world. With the objective of deepening mutual understanding between the people of Japan and other countries/regions, our various activities and information services create opportunities for interpersonal interactions. The Japan Foundation develops programs in three different fields—arts and cultural exchange, Japanese Language education overseas, and Japanese studies and intellectual exchange.

The Japan Foundation has a global network consisting of the Tokyo headquarters, the Kyoto Office, two Japanese-language institutes, and 25 overseas offices in 24 countries (including two Asia Center liaison offices).

The Japan Foundation, New Delhi was officially established in January 1994 and since then has been carrying out the Foundation’s programs thoroughly.