Janhvi Kapoor talks about their friendship in the Koffee With Karan 7 trailer; Sara Ali Khan wants to date Vijay Deverakonda. 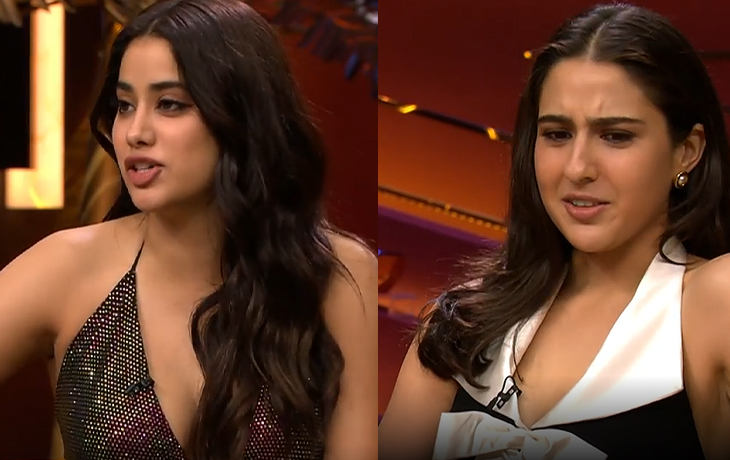 The seventh season of “Koffee With Karan” debuted on July 7, with Alia Bhatt and Ranveer Singh as the first guests. One of the most talked-about programs ever of all time. Stars of Rocky Aur Rani Ki Prem Kahani Alia Bhatt and Ranveer Singh appeared on the couch to start the first episode. The two discussed their respective personal and professional lives openly and honestly. As of right now, Janhvi Kapoor and Sara Ali Khan will be the second guests to grace the sofa, according to a new trailer provided by Karan Johar from the forthcoming episode.

KJo posted a clip of Janhvi talking about her friendship with Sara. It hears her say, “So many people have told us that y’all bring out like an obscene side to each other.” The actress responds humorously, “Watch out.” Karan later questions Sara, “Give me a name of a boy you feel like dating.” The actress claims she won’t respond to the query and says, “Vijay Deverakonda.” Then, Karan tells Janhvi, “I’ll see you with Vijay Deverakonda,” Sara questions Janhvi, “Do you like Vijay?” The actress from Roohi responds afterwards and adds, “What is this?” Karan asked Sara to make a list, “one reason why your ex is your ex,” Sara responded, “Because he’s everyone’s ex.” while Janhvi nearly fell off the couch.

Sara and Janhvi were told to take the names of their mothers’ filmography in another show episode (Amrita Singh and late Sridevi). The episode will be released on July 14.

Karan shared a clip from the film on social media with the caption: “Two of my favourite girls at their unfiltered best! Get ready for episode 2 of #HotstarSpecials #KoffeeWithKaranS7 streaming from July 14 on Disney+ Hotstar!”. This season, the couches will be graced by Shahid Kapoor, Akshay Kumar, Samantha Ruth Prabhu, Vijay Deverakonda, Kiara Advani, Varun Dhawan, Tiger Shroff, Ananya Panday, etc.

Kourtney Kardashian, twin with a daughter named Penelope, shares a glimpse of how her “little lady” turned 10.