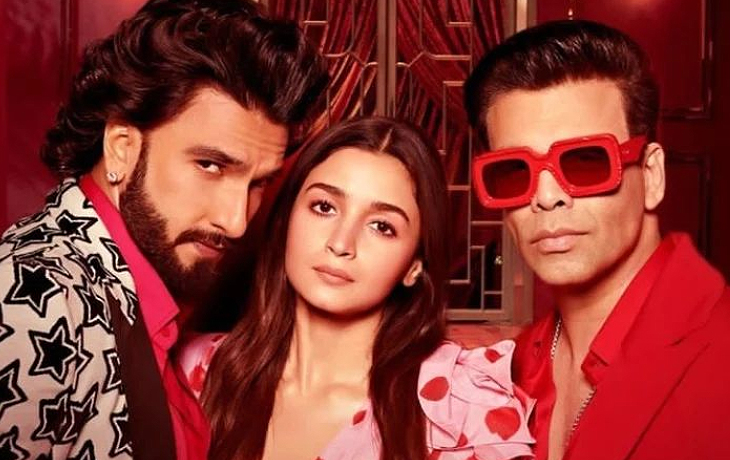 Whether you love or dislike it, you cannot help but notice the buzz surrounding Koffee With Karan. The seventh season of Karan Johar’s famous chat show, Koffee With Karan, debuted on an OTT platform after much waiting and anticipation. The first celebrities to appear this new season is Alia Bhatt and Ranveer Singh, a.k.a. “Rocky Aur Rani,” natives of KJo. No points are awarded for guessing! The two actors made it an entertaining watch with all their spicy confessions.

The Koffee Craziness began with the director host giving Alia and Ranveer a warm welcome. As they settled in, the discussion switched off in many directions, touching on topics such as the “vilification” of Bollywood, Alia’s time spent with the Kapoor family during the pandemic, her romantic proposal to and marriage to Ranbir Kapoor, Ranveer Singh’s friendship with “Sakhi” Alia, and much more. It was a terrific first episode since there was a lot of comedy and drama, and Alia’s honesty and Ranveer’s tremendous energy are undoubtedly enjoyable.

Ranveer Singh says to Karan that he can identify with him because people try to label them as “frivolous” just because they go through life with a smile. And hasn’t this been the show’s big attraction for the past 18 years? Even though there are many chat shows in the city, Karan’s adventure with the Koffee Couch is his open engagement with his famous guests, which gives fans a better understanding of who they are outside of film, Instagram posts, and media appearances. Being allowed to listen in on a chat amongst B’Town friends, co-stars, and rivals is nearly voyeuristic, but it’s still harmlessly entertaining.  Karan appears to be slightly more careful this year, though not overly. I’ll explain. He is not afraid to say that Bollywood has been “vilified” during the past two years. As he makes fun of how people call him “Gayjo” or use snake emojis next to his name, he partly channels Taylor Swift. However, it appears that he may not be in the mood to cause too many controversies this time. The cult-favourite Rapid Fire round’s questions seemed much safer, with no opportunity for Alia or Ranveer to utter anything slightly like “not appropriate.” The Koffee With Karan Quiz adopted a similar strategy. But the Bingo game allowed his guests to reveal some juicy details about their sex playlists, roles they had been passed over for, and more

During the TKSS tour, Kapil Sharma poses with a stylish car and jokes about going for a walk in it.