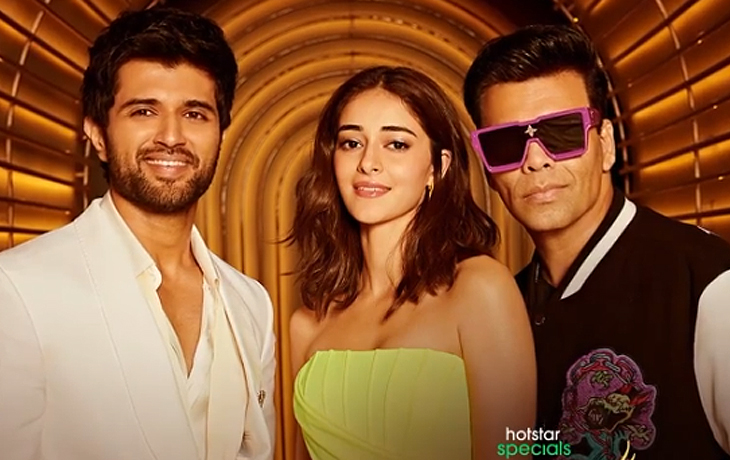 In the fourth episode of Koffee With Karan Season 7, actresses Ananya Pandey and Vijay Deverakonda joined on the KWK sofa. The episode had its fair share of frank confessions, rumours, and fascinating surprises. Soon, viewers will see the two actors on-screen together in Liger, serving as Deverakonda’s Bollywood debut.

Following are 5 noteworthy events from the show, including Deverakonda’s disclosure of his present romantic situation and more:

We won’t soon forget the scene from the second episode of Koffee With Karan where Sara and Janhvi joked about who liked Vijay and even referred to him as “a slice of cheese.” Additionally, Sara acknowledged that she would like to date the actor. Vijay’s retort to this, though, was highly amusing.

Suhana Khan and her older brother Aryan Khan, children of superstar Shah Rukh Khan, were childhood pals of Ananya. Ananya recently admitted that she had had a crush for Aryan. She said it would be romantic if they were together, “Just like in a movie.”

Everyone is aware of the chemistry that Vijay and Rashmika Mandana have on-screen. Together, the two had already released some significant successes, including Dear Comrade and Geetha Govindam. When asked about his relationship with the actor, Vijay denied the rumours, claiming that “they’re just good friends.”

Despite being a huge hit, Shahid Kapoor’s Kabir Singh, based on Vijay’s Arjun Reddy, faced harsh criticism for its misogynistic portrayal. Many even referred to the movie as “anti-feminist” and “sexist.” The actor had a mysterious response to offer to Karan when the latter questioned him about playing such a role on screen.

Ananya finds Aditya Roy Kapoor “Hot.”
I would be inebriated if I had to take a shot every time Ananya said, “He’s hot,” in response to Karan’s inquiries about Aditya.

The music video for BLACKPINK’s latest track Ready For Love, is here; Here’s a sneak peak