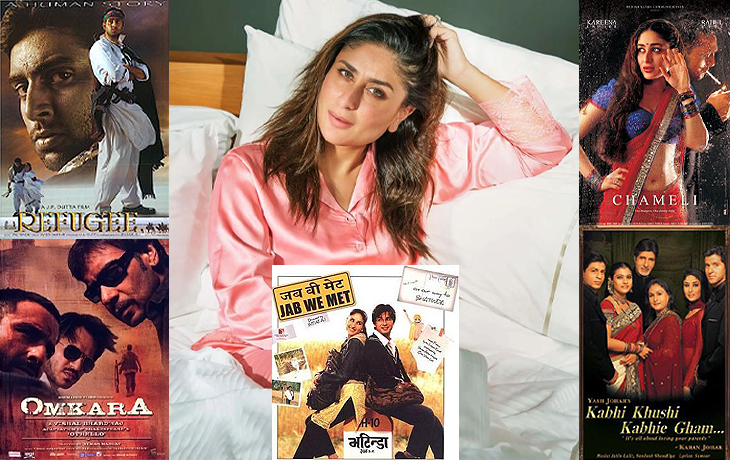 Bollywood’s most influential brands include Kareena Kapoor. She has maintained the Kapoor khandaan’s flag’s high flying with a filmography spanning two decades. Born on September 21, 1980, Kapoor is the daughter of actor Randhir Kapoor and actress Babita. Karisma Kapoor, an actress, is her elder sister. With Refugee, she made her Bollywood debut in 2000. She has grown more assertive, playing various roles in films including Chameli, Jab We Met, and Udta Punjab. Here is a list of her top ten unforgettable movies as she turns 42.

In her Bollywood debut, Refugee (2000), Kareena Kapoor starred as Nazneen alongside Abhishek Bachchan. Kapoor played a simple girl in her debut performance and immediately won the audience’s hearts.

Kareena’s role as ‘POO’ in Karan Johar’s movie Kabhi Khushi Kabhie Gham was one of her best roles. Her outfits, styles, and look in the film are still highly well-liked.

In Chameli, Kareena Kapoor performed in her role as a female escort. The actor is said to have visited the red-light area of Mumbai while wearing a disguise to learn and emulate the mannerisms of a female escort. She attracted legions of fans with her sensitive portrayal of Chameli.

The movie helmed by Vishal Bhardwaj is a version of Othello by Shakespeare. The film, which stars Saif Ali Khan as wicked Iago/Langda Tyagi, also features Kapoor as Desdemona/Dolly, the wife of Othello/Omi, who is murdered by her partner in a fit of rage. Omi later kills himself out of regret. She received a lot of appreciation once more for her nuanced portrayal.

Geet, a Punjabi girl, was one of Kareena Kapoor’s most endearing characters in Imtiaz Ali’s Jab We Met. She comes out as a loud, aggressive, and incredibly cute chatterbox. The tale’s hero was Shahid Kapoor’s Aditya, whose life changed after meeting Geet on a train headed towards Bathinda.