Popular
“Aditya Dhar, You’re The Biggest Blessing In Life,”...
Ajay Devgn And Varun Dhawan Praise Each Other...
Dhanush And Sekhar Kammula Collaborating For A Trilingual...
Exclusive Interview: Ravindra Parekh, a Writer, Poet and...
Tiger 3: Salmaan Khan to reunite with actress...
Tahira Kashyap States that she borrowed money from...
Kartik Aaryan Is Spooky In Freddy’s New Teaser
Mahesh Babu Pens A Heartfelt Note For His...
Ranbir and Alia disclose the name of their...
Anand L Rai on Akshay Kumar’s Raksha Bandhan’s...
Home South Boss Party Song Is Out Now; Megastar Chiranjeevi Gets Groovy
South

Boss Party Song Is Out Now; Megastar Chiranjeevi Gets Groovy 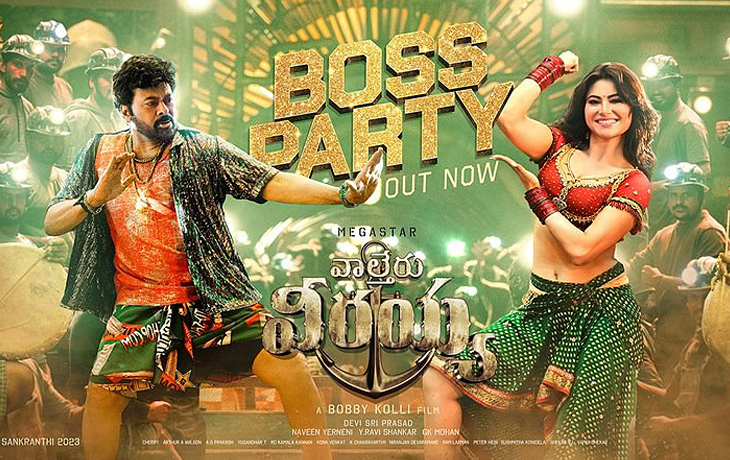 The Boss Party song from Waltair Veerayya, starring megastar Chiranjeevi, is finally out and going viral by the minute.

DSP composed the song, which he sang with Haripriya, Nakash Aziz, and others as Boss Party. Fans can expect everything from the well-known duo of Chiru and DSP in the lyric video. The upbeat music, fun atmosphere, the Megastar’s beautiful movements, and the colourful frames are guaranteed to get his followers all worked up. Also, Urvashi Rautela, featured in a special appearance, is noticeable.

The film, which will be released in theatres in January 2023, was directed by Bobby Kolli. The movie, made by Naveen Yerneni and Y Ravi Shankar, features notable performances by Ravi Teja, Shruti Haasan, and Catherine Tresa, among others.

The editing and action choreography for Waltair Veerayya, which is anticipated to be Chiranjeevi’s much-anticipated blockbuster and on which fans have high hopes, are being handled by Niranjan Devaramane and Ram-Lakshman, respectively.