Popular
Upasana Konidela, the wife of Ram Charan, apologizes...
Shaakuntalam featuring Samantha Ruth Prabhu is postponed again;...
Trailer for Hansika’s Love Shaadi Drama Out: The...
Anupam Kher Responds to Shah Rukh Khan’s Pathaan’s...
The Sridevi-starring film English-Vinglish will premiere in China on...
Vikram Bhatt Shares A Sneak-Peek Into 1920 –...
Kangana Ranaut Warns Her Stalker
Neil Bhoopalam As Jeet And Tushar Pandey As...
Akshay Kumar Looks Super Cool In Kudiyee Ni...
Vijay Deverakonda And Parasuram Petla Collaborating For A...
Home Hollywood At the funeral of the Queen, Prince William invites Prince Harry and Meghan Markle to sit next to him
HollywoodNews

At the funeral of the Queen, Prince William invites Prince Harry and Meghan Markle to sit next to him 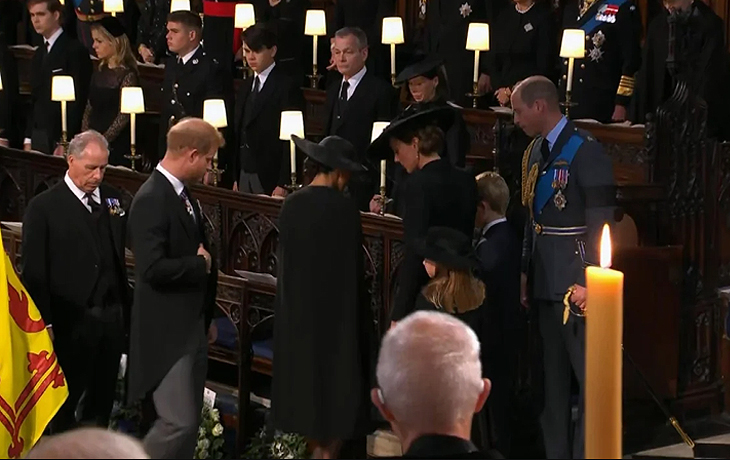 Prince William gently invited his younger brother Prince Harry to join him and his family on Monday for the late Queen’s burial service at St. George’s Chapel. Princess Charlotte, age 7, and Prince George, age 9, were present at the committal service and the Queen’s final public service at Westminster Abbey with their father, Prince William.

Prince William was photographed urging Prince Harry and Meghan Markle to sit next to Prince William, and Kate Middleton as everyone at the chapel was settling down, according to ET. Due to their diminished royal rank after renunciation of the royal titles in favour of the more humble titles of Duke and Duchess of Sussex, Meghan and Harry have been given seats a few rows further back at services for the Queen. Before, many royalists observed that the pair were seated far from William’s family in the second row of the Westminster Abbey liturgy, next to their cousins Princess Beatrice and Princess Eugene.

William motioned for the couple to sit together, suggesting that he may have heard some of the royal rumours circulating or simply wanted his brother to be close during the committal service. All the royals appeared to be mourning during the day, and Princess Charlotte was even photographed sobbing for her great-grandmother. The gesture by William comes as much of a surprise as during the long rituals and processions since the monarch’s demise, the estranged brothers have scarcely interacted with each other even though they were beside one another for long periods. William’s one action will undoubtedly relieve some of the tension created by the rumours of a tense relationship between the royal brothers.

DoctorG Trailer Out: Ayushmann Khurrana is a male gynaecologist in the new movie

Akshay Kumar Having The Best Day Ever With Daughter Nitara