Popular
“Aditya Dhar, You’re The Biggest Blessing In Life,”...
Ajay Devgn And Varun Dhawan Praise Each Other...
Dhanush And Sekhar Kammula Collaborating For A Trilingual...
Exclusive Interview: Ravindra Parekh, a Writer, Poet and...
Tiger 3: Salmaan Khan to reunite with actress...
Tahira Kashyap States that she borrowed money from...
Kartik Aaryan Is Spooky In Freddy’s New Teaser
Mahesh Babu Pens A Heartfelt Note For His...
Ranbir and Alia disclose the name of their...
Anand L Rai on Akshay Kumar’s Raksha Bandhan’s...
Home Hollywood After attending Travis Scott’s London concert with daughter Stormi, Kylie Jenner poses for fresh selfies cuddling up to him.
HollywoodNews

After attending Travis Scott’s London concert with daughter Stormi, Kylie Jenner poses for fresh selfies cuddling up to him. 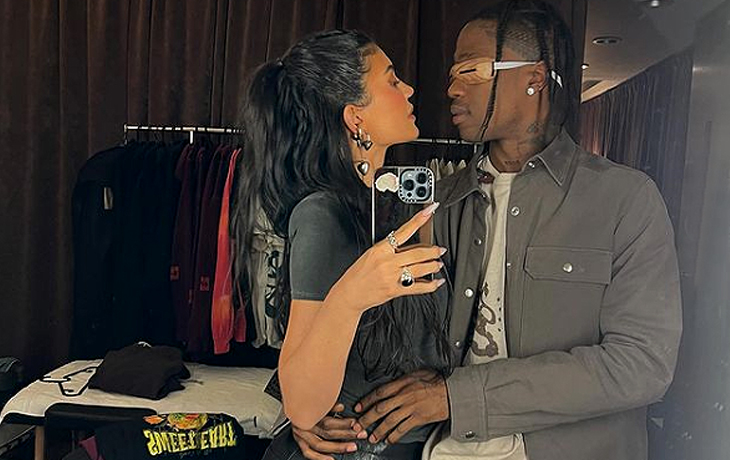 Following a recent trip to see Travis Scott perform in London, Kylie Jenner posted pictures with him on Instagram. The beauty mogul shared romantic selfies with her boyfriend while posing for them. “Utopia with u,” Kylie captioned the images she shared. Earlier, Kylie posted pictures and videos from the O2 arena where Scott performed.

Travis was seen cuddling his daughter Stormi in one of the backstage images before ingesting the sage. Regarding the couple’s recent selfies, the images showed the couple cuddling up while they shared an embrace and a kiss. The trip to London that Kylie and Travis took coincided with Jenner’s 25th birthday. The duo had recently fueled marriage rumours as well.

During Future’s performance at Rolling Loud in Miami last month, Scott made his first festival appearance since the tragic Astroworld disaster. Before moving on to Scott’s songs Goosebumps and No Bystanders, the 38-year-old rapper performed their collaboration Hold That Heat. Scott introduced Project HEAL, a series of community-centred charitable endeavours, in the wake of the Astroworld tragedy and stated that he has used the time since to “grieve, ponder, and do my part to heal my community.”