With a ‘bruised face,’ Priyanka Chopra enjoys ice cream on the set of Citadel. 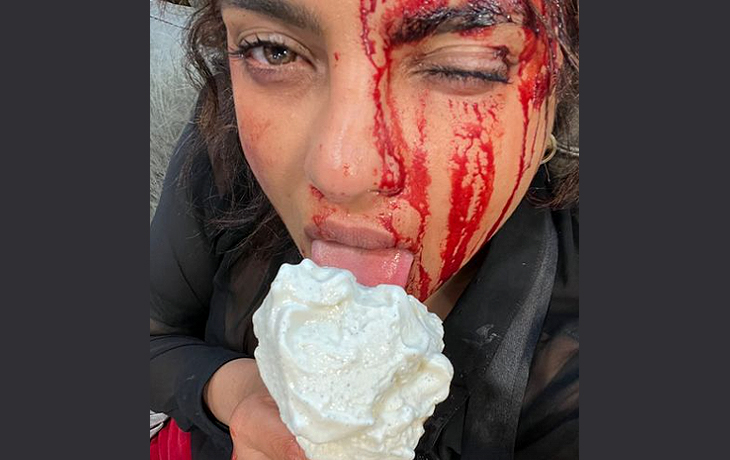 Priyanka Chopra is a well-known actress who needs no introduction. The actress is a constant social media user with a sizable fan base. The Bajirao Mastani actress occasionally updates followers on her everyday activities. Priyanka Chopra is filming her next Hollywood debut online series Citadel, which she has teased with her avatar. The actress shared a photo of her wounded face while eating lunch a few hours ago.

The Mary Kom actress shared a photo of herself having ice cream for lunch on her Instagram story, writing, “Ice cream for lunch.” Should’ve seen the other guy (emoji wink)” As she shoots another action scenario for the series, Priyanka’s face is covered in fake bruises and blood.

“Did u have a terrible day at work?” she asked her fans on Wednesday after posting a photo of her injured face to her social media handle. Accompanied by an emoji of a big smile, “Actor’s life,” “Citadel,” and “a day in the life” were among the hashtags she used.

After birthing her baby Malti Marie Chopra Jonas with her husband, musician Nick Jonas, the new mom continued shooting for the show in January. The Dil Dhadakne Do actress uploaded an Instagram Story photo from the set on her return to work. “Back to work,” she wrote in a note. Citadel.”

In the meantime, the Russo brothers of the Avengers fame are directing Citadel. It’s one of the most anticipated projects, and Priyanka will be collaborating with Eternals star Richard Madden on the film, which will debut on Amazon Prime Videos.

Speaking about Indian Cinema, Deepika Padukone says, “India won’t have to be at Cannes; Cannes will be in India.”

Kanika Kapoor and her soon-to-be husband Gautam are over heels in love, as their Mehendi celebrations are all about love and fun.